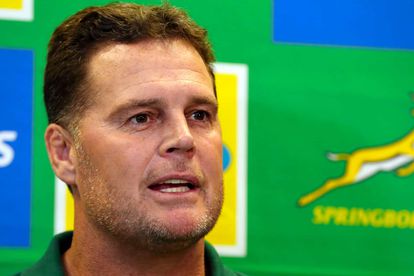 Jacques Nienaber is reportedly set to take over from the outgoing Rassie Erasmus as head coach of the Springboks. Photo: Chris Ricco/BackpagePix

Jacques Nienaber is reportedly set to take over from the outgoing Rassie Erasmus as head coach of the Springboks. Photo: Chris Ricco/BackpagePix

Two players have been released from the Springboks Rugby Championship squad, with a 36-man touring party confirmed for the rest of the tournament.

Rassie Erasmus’ men kicked off their campaign with a resounding 35-17 victory over Australia at Ellis Park on Saturday, despite fielding what was a largely experimental side, missing several stars, who had already travelled to New Zealand for their next fixture.

The Boks square off against the All Blacks in Wellington on Saturday, before jetting off to Argentina, where they conclude their campaign with a clash against Los Pumas in Salta.

They will do so without the services two members of the original squad in Bulls flanker Marco van Staden and Western Province utility back Dyllin Leyds, who have both been released for Currie Cup duty.

A total of 14 first-team players were not part of the festivities at Ellis Park, after they left for New Zealand on Thursday.

According to the Springboks, a further eight players, along with Erasmus and the rest of the coaching staff, took the next available flight out of Johannesburg soon after the victory. They are captain Eben Etzebeth, Jesse Kriel, Pieter-Steph du Toit, Rynhardt Elstadt, Trevor Nyakane, Elton Jantjies, Herschel Jantjies and Bongi Mbonambi.

Prop Lizo Gqoboka, who made his Bok debut on Saturday, is among the last batch of players to jet off, alongside teammates Warrick Gelant and Marvin Orie, as well as Sharks centre Andre Esterhuizen.

The quartet will be joining the rest of the squad on an unspecified day later in the week.

The Springboks top the Rugby Championship standings after claiming a bonus-point win against the Wallabies, while New Zealand edged a close affair against Argentina to come in second.