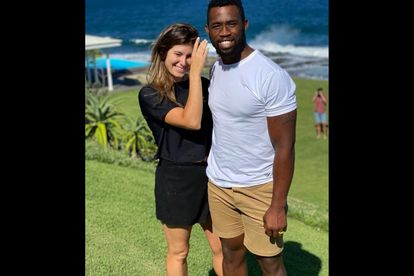 In his autobiography ‘Rise’, Springbok captain Siya Kolisi – with searing honesty – recalls his battle with alcohol and how it almost cost him his family.

Part of his story touches on the 2015 Rugby World Cup, when Kolisi was part of the wider Bok squad, but didn’t feature regularly in the match-day team.

“Whenever I had time off, I just drank. I was bored and feeling sorry for myself, there were other guys around in the same boat who were always happy to hang out, and it was all too easy for me to hit the bars and pubs and be a good-time guy,” he wrote.

“Rachel [my wife] had come out with baby Nick, and this would have been the perfect opportunity to spend some time with them; but no, I preferred to be out with the boys. It was an awful time for her, and I was too selfish to realise. In the end Rachel got fed up with me being a jerk and flew home a week early.”

In his book, Kolisi later discusses how – in stark contrast to his behaviour in 2015 – the non-playing members of the 2019 World Cup squad fulfilled such key roles in the team preparation and planning.

Kolisi led the Boks to their third World Cup title in 2019, but one of the fascinating revelations in his book reveals how a major change was required four years earlier to set him on the path to such success, and how it was largely inspired by wife Rachel, as well as adopted sister Liphelo.

“A few weeks after the World Cup had ended and we were back home, I was lying on the grass on a Sunday morning, as hungover as it’s possible to imagine. My eyes were bloodshot and I stank of alcohol. ‘This is how you look when you’ve been bad,’ Liphelo, the sister whom I had adopted, said. She was six at the time, the perfect age for a child to tell you a home truth without even realising that they’re doing so.

“The trajectory of my life was bad. I had to stop behaving like this or else I’d lose my family. It wasn’t ‘stop drinking’, because drinking would have been fine if I’d just had a couple of beers and stopped there. It was ‘stop drinking until you’re obliterated, each and every time’. Because that’s what I was. Whenever I opened a drink it was as though there was a message at the bottom of the bottle saying ‘drink me, keep on going’. I’d binge and not remember what had happened the night before.…

Kolisi and his family would later go to Hillsong Church in Century City, Cape Town, where he was baptised.

“I did feel new after that,” Kolisi continues to explain in the book. “It wasn’t that all my problems suddenly stopped or that I became an instant saint, far from it. I’d struggle with alcohol from time to time – as a team we’d bond over a couple of beers and it was hard to say no sometimes – and my commitment to Jesus would occasionally waver. But deep down I wanted to be better – a better person, a better father, a better husband – and that path began the moment I went under the water in Century City.”

READ | THREE SAFFAS ABROAD WHO CAN STAR FOR BOKS IN 2022, INCLUDING A BOLTER!