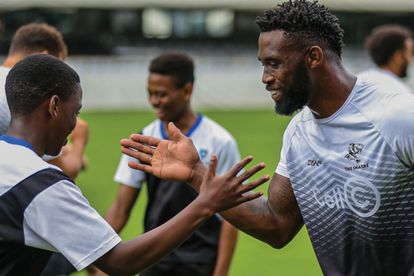 Siya Kolisi ready to groove! The Drakensberg Boys Choir and Sharks players got down on the field singing and dancing to the hit ‘Follow You’. Image via Facebook @DrakenbergBoysChoir/ Copyright: H Cleland Pix.

Siya Kolisi ready to groove! The Drakensberg Boys Choir and Sharks players got down on the field singing and dancing to the hit ‘Follow You’. Image via Facebook @DrakenbergBoysChoir/ Copyright: H Cleland Pix.

What do you get when the worlds of rugby and choir collide? Watch the Sharks break it down with the Drakensberg Boys Choir!

That’s exactly what happened when the Drakensberg Boys Choir recently snuck into the Sharks’ changing room at Hollywoodbets Kings Park in Durban before the team ‘chased’ them onto the field.

The choir broke out in song and dance – and the Sharks joined in on the fun!

The Drakensberg Boys Choir’s English teacher, Pamela Couzyn, told SAPeople the collaboration came about after the Sharks saw the video of the choir’s rendition of the Imagine Dragons hit, Follow You.

ALSO READ: URC: When next will the Sharks, Stormers, Bulls and Lions be in action?

“They loved the song and their marketing person contacted ours and the rest is history. I think even the Stormers/Lions supporters among our boys are now big Sharks fans,” she told the publication.

“Magic happens when the arts and sports come together! Following the success of the original Follow You video, The Sharks rugby team reached out to the Drakensberg Boys Choir to do a collaboration, bringing the two different worlds of Sport and Art together. We are so honoured to have been able to take part in this incredible project involving two iconic Kwazulu Natal brands,” the Drakensberg Boys Choir posted on their YouTube channel.

‘Turning the tables in the tunnel’

In the video, the choir boys can be seen sneaking into the Sharks’ changing room where they take selfies with a Sharks jersey, before being chased onto the field by the rugby team.

The choir then break into song and dance and are soon joined by a number of well-known Sharks players, including Springboks Siya Kolisi, Lukhanyo Am, Aphelele Fassi and Bongi Mbonambi among others.

After the fun was had, the Sharks gave the boys a standing ovation as they exited the field through the tunnel.

“Turning the tables in the tunnel as we salute the Drakensberg Boys Choir on yet another magical performance ????,” the Sharks posted along with the video on social media.