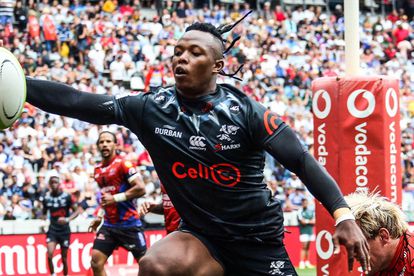 Nkosi has recently been linked to local rivals the Bulls, with the player not featuring for the Sharks last night raising further suspicions over his future in Durban.

Nkosi has been part of the Sharks structures since 2015 and quickly progressed through to their senior structures in two years.

Nkosi made is an established Springbok

It then, wouldn’t take long for Nkosi to make yet another step up, as he was named in a Springbok squad for the first time in 2018. He would subsequently make his debut against England, making an instant impact in the green and gold after a brave leap of faith from SA director of rugby Rassie Erasmus.

Injuries would then unfortunately see Nkosi lose what had now become his number 14 jersey, to Cheslin Kolbe. Kolbe would then go into the world cup as the first choice in that position with the burly winger having to bide his time. Luckily for Nkosi, however, he hasn’t had to face the same predicament at the Sharks, as a part from injuries, he has found himself keeping his spot on the Durban-based side’s right wing.

He is yet to sign a contract extension at the Sharks

That could potentially change, however, as Nkosi is yet to sign a new contract with the Sharks and as preciously reported by The South African News, CEO Eduard Coetzee has admitted that, as much as they want him to stay, he could be on his way out.

That prospect became an even bigger possibility ahead of the Sharks United Rugby Championship home loss to Edinburgh on Saturday evening. Quizzed on the continued absence of Nkosi, amid the rumours of him switching the Sharks for the Bulls, Everitt clarified that it was purely due to an ongoing injury.

Why he missed the Edinburgh fixture

“Sbu had health issues, he had a gastric intestine virus, and he hasn’t recovered from that and as soon as he has recovered, he will be available for selection,” confirmed Everitt as per The SowetanLIVE.

Everitt then dropped a bombshell which could signal that Nkosi maybe about to leave the Sharks for the Bulls once his contract comes to an end later this year.

“He has obviously been offered to go to the Bulls, but nothing has been put on the paper yet, so nothing is final. There are negotiations that still have to happen as Dr Eduard Coetzee has mentioned.” Said Everitt.

Coetzee had previously mentioned the possibility of losing Nkosi, but this was the first time the name of the Bulls was mentioned. If the powerfully built winger has still not signed a contract extension with the Sharks, that could be a sign that he has already made up his mind about moving on to a new challenge.