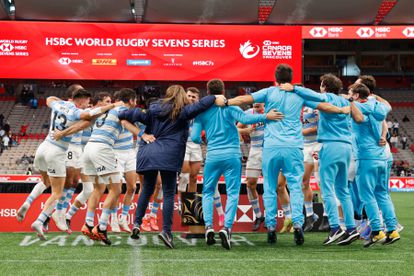 Argentina upset Olympic champions Fiji to win the Vancouver leg of the World Rugby Sevens, their first win in the series since 2009. Photo: Twitter @lospumas7arg

Argentina upset Olympic champions Fiji to win the Vancouver leg of the World Rugby Sevens, their first win in the series since 2009. Photo: Twitter @lospumas7arg

Argentina upset Olympic champions Fiji 29-10 to win the Vancouver leg of the World Rugby Sevens, their first win in the series since 2009.

Marcos Moneta and Felipe Del Mestre scored two tries apiece for Argentina in the emotional triumph over a Fijian side coming off a victory in the Singapore Sevens a week earlier.

“You have to dream, because dreams do come,” said Argentinian coach Santiago Gomez Cora, who was playing the last time they won a Cup event on the circuit.

“Ever since I have been a coach this has been the moment I have been working towards, and my players must take all the credit because they work so hard and they wanted to win this one for their country so much.”

Fiji had taken the lead on two minutes on Kaminieli Rasaku’s unconverted try.

Argentina, who earned Olympic bronze in Tokyo, added two more tries before half-time. They led 17-5 with seven minutes remaining, but after Wade received a yellow card, Fiji capitalised with a score from Jerry Tuwai.

But Del Mestre’s converted try, set-up by Moneta, put Argentina up 24-10, and another try from Del Mestre ended it.

Australia took the bronze medal, rallying in the second half for a 21-19 victory over Samoa.

South Africa finished fifth, but maintained their lead in the series after six rounds with 111 points.

Argentina jumped into second place on 105 points, and Australia finished the weekend third on 100 points.

England, thumped 40-17 by Argentina in the quarter-finals, also bid farewell to Dan Norton, the top all-time Series try-scorer with 358.

The 34-year-old, who was part of the Great Britain side that won Olympic silver at the 2016 Rio games and represented Team GB at Tokyo last year, had announced this was to be his last tournament.

“I’ve loved every minute of it.”