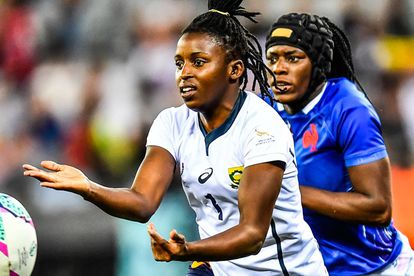 The Springbok Women’s Sevens team’s Rugby World Cup Sevens 2022 campaign started on a tough note as they went down 29-0 to France – who have booked their place in the quarter-finals – on Friday evening.

The South Africans will now face Japan in the Challenge quarter-final on Saturday, with kick-off scheduled for 10:37.

While they tried very hard and had some good moments with the ball in hand, it was a jittery performance with too many errors by the home team, especially on defence and in retaining possession at the breakdowns, while the more experienced French simply had too much pace out wide.

South African co-captain Mathrin Simmers was disappointed after the match, but not dejected.

“It was quite tough out there,” said Simmers.

“Things didn’t go as we planned but we kept on fighting. We didn’t get the result, but I am proud of the girls. At the breakdown, we didn’t look after our ball, and we always knew it was going to be tough against them there.”

ALSO READ | WHO IS IN CHARGE OF BOKS’ ATTACK? RASSIE ANSWERS EX-PLAYER

Simmers also spoke on the team’s appearance in front of a passionate home crowd at Rugby World Cup Sevens, after having also played in 2013 and 2018: “It was quite amazing hearing the crowd go wild as we ran out onto the field. Tomorrow we get to go again and again and, hopefully, on Sunday as well.”

France started well by pinning South Africa in their half from the kick-off and after a mistake by the host nation, the Europeans quickly moved the ball wide to where Lou Noel crashed over in the corner after 50 seconds.

French mistakes gave the Springbok Women’s Sevens some breathing space and they gradually worked their way into their opponents’ 22, but the team in blue’s defence held firm and after a turnover, Camille Grassineau found space on the left and went over, with the conversion stretching their lead to 12-0 with time running out in the first half.

The South Africans again got their hands on the ball, only to lose it with Chloé Pelle racing away for another long-range try. Jade Ulutule added her second conversion to see France lead by 19-0 at the break.

More SA mistakes and missed tackles followed early in the second half and just over a minute in, Pelle scored her second try.

France scored their fifth try with just over two minutes to go, by Séraphine Okemba, from a scrum turnover inside the SA 22, which they quickly spread wide, outflanking the SA defence.