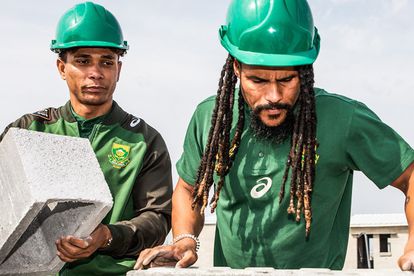 Plastic waste from Rugby World Cup Sevens 2022 – which kicks off in Cape Town on Friday, 9 September – will be turned into affordable housing. Photo: SA Rugby website

Plastic waste from Rugby World Cup Sevens 2022 – which kicks off in Cape Town on Friday, 9 September – will be turned into affordable housing. Photo: SA Rugby website

Plastic waste from Rugby World Cup Sevens 2022 – which kicks off in Cape Town on Friday, 9 September – will be turned into affordable housing as one part of the tournament’s drive to deliver South Africa’s most environmentally responsible rugby event ever.

World Rugby’s Environmental Sustainability Plan 2030 – launched earlier this year – maps out what the global rugby family should do to contribute to a healthier planet and a more sustainable society.

SA Rugby ran a pilot project during a Test match earlier this year where all the plastic waste – including what was once regarded as non-recyclable material such as chip packets and polystyrene boxes – was collected and converted into pellets to go into the manufacture of bricks.

REPORT | SA RUGBY’S JURIE ROUX ON HIS WAY OUT

“The players actions will no doubt inspire many others to take notice and be a force for good, helping to protect the planet for future generations to continue to enjoy playing rugby in a healthy environment.”

Fans attending Rugby World Cup Sevens will see green plastic rubbish bags all around the venue for the collection of all plastic waste.

A special plant converts the waste into an “eco-aggregate”, called RESIN8. The manufactured RESIN8 is then incorporated into the mix design for the casting of conventional concrete blocks – disposing of 100% of the plastic waste and reducing the need for conventional quarried materials by up to 20 percent.

“This is a really exciting project that we successfully trialled in July and to see that plastic waste rise up as housing is tremendously exciting,” said Jurie Roux, CEO of SA Rugby.

“Everyone has a responsibility to look after the natural environment for future generations and rugby is not blind to its responsibility. Please look out for the green collection bags if you are attending the tournament, every item that is deposited is potentially one less piece of plastic that will end up in landfill or even in our oceans.”

The “bag that builds” initiative is just one part of the event’s sustainability drive to contribute to World Rugby’s climate action focus areas of the carbon footprint of the sport; introducing climate adaptation measures across events and using the sport’s global platform to spread awareness.

Other operational initiatives during the event to address climate action include:

Fans attending the tournament in person or joining the action remotely can also click here to discover their own footprint and take positive steps to reduce their impact.

The three-day festival of sevens rugby kicks off at 08:45 at the Cape Town Stadium on Friday at the start of 38 hours of non-stop on-field and off-field entertainment.

Tickets for the event are still available for all three days and can be exclusively bought at www.rwcsevens.com.