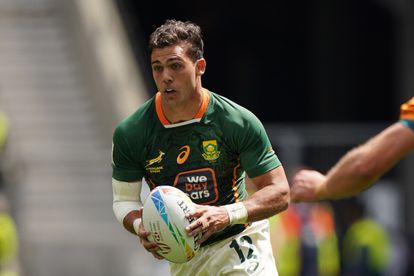 Speedster Muller du Plessis is hoping to win gold at the Dubai and Cape Town Sevens tournaments over the next two weeks before leaving the Blitzboks for the Sharks.

The Blitzboks finished seventh at the first World Sevens Series tournament of the season in Hong Kong, but Du Plessis is hoping for a far better performance from his team at the Dubai Sevens, which kicks off on Friday 2 December, and the Cape Town Sevens a week later.

ALSO READ: Blitzboks aim for a perfect 10 in the desert

Both events will serve as his Blitzboks swansong before he leaves to link-up with former sevens boss Neil Powell at the Sharks in Durban in a few weeks’ time.

For Muller du Plessis, the Dubai tournament in particular holds special memories. He has two gold medals from two outings at the tournament, although in his last appearance a year ago, he sustained a leg injury that kept him out of action for close to six months. And he hopes he can add to his gold medal tally before his sevens departure.

“It is always a nice double, being able to play Dubai and then Cape Town, two of the favourite tournaments for most in the series,” said Du Plessis.

“I have good memories here and we are determined as a squad to make more memories. For me it will also be personal, leaving the system.”

The Dubai leg of the World Rugby Sevens Series kicks off on Friday, with the Blitzboks playing Great Britain, Kenya and Australia in Pool A.

Statistical summary ahead of Dubai Sevens: