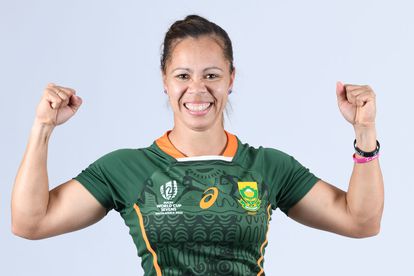 Joining Simmers are Nadine Roos, Zintle Mpupha and Eloise Webb, all of whom will make their second RWC 7s appearance when the action kicks off at Cape Town Stadium next Friday. Simmers and Sizophila Solontsi will co-captain the women’s side.

The Springbok Women’s Sevens team will play France in their tournament opener at 18h35 on Friday, and the Blitzboks will take on the winner of the qualifying match between Germany and Chile at 19h03. All the action will be broadcast live on SuperSport.

Team coach Paul Delport named a squad consisting of 14 players each at the official team announcement in Stellenbosch on Friday and will confirm the final 12 players next Wednesday, before the 48-hour deadline for the tournament, to be played from 9-11 September.

The Springbok Women’s Sevens will open their campaign against France in the second last game on Friday evening, and Delport said they are not looking past that encounter.

“We are focused internally and want to make sure we play that game with clarity amongst the group,” said Delport.

“You only get to play a Rugby World Cup Sevens tournament in your own country once and we hope to make the best of it.”

Mathrin Simmers was an obvious choice to lead.

On his decision of naming co-captains, Delport said: “Home tournaments create a lot of extra pressure on our captains and we want to spread the workload in that regard and also wanted to make sure we have a captain on the field all the time.

“Mathrin Simmers and Sizo are both experienced campaigners and leaders and will complement each other in that regard.”

Only Simamkele Namba has not played for the team before, with a number of players who made their debuts in this year’s World Series, Commonwealth Games or Challenger Series.