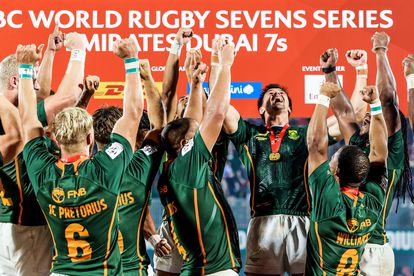 Fans will have the opportunity to mix with the Blitzboks and the Springbok Women’s Sevens team during a meet and greet signing session in Cape Town on Wednesday.

The Blitzboks and Springbok’s Women Sevens team currently are preparing for the upcoming sevens series tournament in Cape Town this weekend.

On Monday, a SA Rugby official confirmed that both national sevens teams will engage in an open signing session at the Amphitheatre at V&A Waterfront shopping mall, situated in the heart of the Waterfront precinct, from 1pm 2:30pm on Thursday, 7 December.

Fans will be able to get autographs and take selfies with their favourite players and there will be prizes up for grabs.

The Blitzboks team are currently first on the World Rugby Sevens Series table, after two tournaments — in Hong Kong and Dubai — and will look to extend their lead at the top of the log with a Cup-winning performance at their home tournament in Cape Town.

Blitzboks in pool of death at Cape Town Sevens

South Africa have been drawn in Pool A for the tournament scheduled to take place at the Cape Town Stadium from 9-11 December.

They will face France, Fiji and Canada in their pool matches.

The Cape Town Sevens is known for its carnival atmosphere, and it was in this spirit that the team was warmly welcome back to South Africa shores this past weekend after their stunning Cup win in Dubai.

As reported by The South African website, the Blitzboks moved to the top of the HSBC World Rugby Sevens Series log after emerging victorious in Dubai on Saturday – for a 10th time.