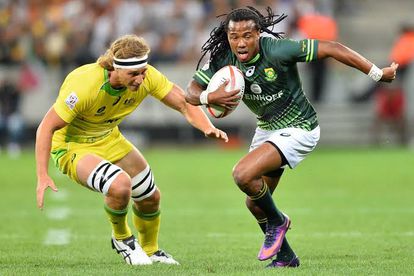 It was confirmed on Friday that Cecil Afrika – the all-time leading Blitzboks points scorer in the World Series with 1462 points – had been recalled to the Springbok Sevens squad due to an injury to Dewald Human.

Afrika will form part of a Blitzboks squad that will be desperate to bounce back from a disappointing showing at the recent Las Vegas tournament as they now head into the Rugby World Cup Sevens tournament in Cape Town thist weekend.

The experienced flyhalf last featured for South Africa in the World Series in 2020, but he has been playing for Monaco in the professional Extenso Super Sevens league in France in recent months.

“I was with my fiancé, Adrielle Armoed, in Port Elizabeth, busy with our wedding arrangements (they are getting married in December) and we on our way to the wedding venue when coach Neil phoned,” said Afrika, recalling the phone call that changed his plans for this Rugby World Cup Sevens tournament.

“I had no idea that he was going to ask me to join, although I have sent him messages in the past, perhaps more jokingly than anything else, like before the Commonwealth Games, telling him I am available. I asked if I can phone him back, as I just needed to chat to Adrielle, but I knew the answer. My country called and I had to answer.”

The fact that he had other engagements, like doing touchline commentary and some other World Rugby commitments at the 2022 event, did not even feature in his mind. As soon as Adrielle agreed that it was an opportunity Afrika had to seize, the return call to Powell was about logistics and getting him to Stellenbosch.

Fast forward eight days and Afrika is now – again – kitted in the green and gold and discussing running lines, angles, rush defence and restarts with Powell, assistant coach, Renfred Dazel, and other stalwarts such as Selvyn Davids, Siviwe Soyizwapi and Ryan Oosthuizen. The integration back into the team was seamless, as if he never left.

“The muscle memory came back straight away,” Afrika explained with a broad smile on Tuesday.

“I am very clear on what coach Neil and coach Renfred want out of the game; I have played for them for a long time. It did take a little longer to process the whole plan, as I was away from the team for a while, but it is all coming back to me.

“It was a bit emotional, taking all in and knowing that I am back where I always felt at home, but that aside, we have a job to do this weekend.

“I was always one to ask a lot of questions at training and that has not changed, so I got all my answers early. It was always great to see how the rest of the squad embraced me and welcomed me back into the team. That was a great feeling.”

WATCH: EBEN SHARES A BEER WITH WALLABIES PROP AFTER ALTERCATION

Afrika played at two HSBC Cape Town Sevens events and is well aware of the huge support the home team get in the Mother City.

“That is massive energy coming to you and the swell of support lifts the team. We must use that to our advantage and send off coach Neil on a high note, so that he can start his new job on a high as well,” said Afrika.

The opportunity to play in a Rugby World Cup is one thing, to do so in your own country is even more special and Afrika is adamant that this should not be an opportunity wasted.

“We must embrace this honour and once-in-a-lifetime opportunity,” he said. “This is a wonderful chance for us to be part of something special. I told the guys when I  joined that I would give everything I have to assist the team. Whatever is expected of me, I will do.”