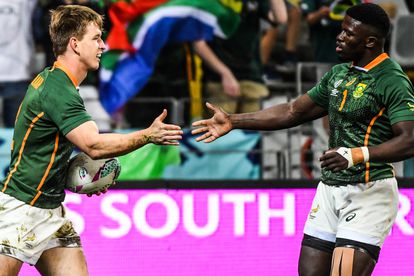 The Blitzboks continue their quest to claim Rugby World Cup glory in Cape Town when they face Ireland in the last eight.

The match kicks off at 22:33 at the end of a full day of Rugby World Cup Sevens action.

The South Africans opened their campaign with a 32-5 win over Chile on Friday evening, but for Blitzbok captain Siviwe Soyizwapi, their defence will have to be more decisive against the Irish, who won both their matches on the opening day, against Portugal (24-0) and England (17-5).

“We were very clinical on attack, especially in the opening part of our match against Chile, but I think we need to be more dominant on defence as we gave a lot of momentum away in the match,” said Soyizwapi.

“Ireland play a very structured game and to be successful against them, you will have to stop their momentum. We did not do that very well against Chile today, so that will be an area to focus on come Saturday.”

Despite the issues they encountered on Friday, the Springbok Sevens team delivered a composed performance to book their place in the quarter-finals, getting their six-try romp off to a good start when Angelo Davids went over after just 20 seconds to settle the nerves in front of a good crowd.

The home team won back the kick-off, and after a few passes Selvyn Davids found space at the back with a kick, which his fellow Davids brilliantly recovered with his left hand to score the first try.

Sako Makata then went over from a clever, wide kick-pass by Ronald Brown for SA’s second try. Brown missed his second conversion, but his team still led by 10-0 with just under four minutes to go.

That quickly changed to 17-0 as the Blitzboks again won back the restart, spread the ball left before another kick-pass to the right found Christie Grobbelaar for their third try. This time Selvyn Davids landed the conversion from out wide.

Chile did not give up though and Joaquin Huici scored their first try after the hooter as they managed to hold onto the ball in the SA 22, with the score at the break 17-5 to the Blitzboks.

Brown was in for the Blitzboks’ fourth try not long after the restart, applying some pressure on a Chilean scrum, stealing the ball and racing 60m downfield for the score, not long before Mfundo Ndhlovu got in on the action from a Chilean kick that he fielded and then brilliantly ran down the right-hand touchline for the try.

It finished how it started for the Blitzboks when Angelo Davids went over for his second try from yet another turnover and some great hands from the South Africans.

For Brown, playing in his first Rugby World Cup Sevens was a moment to treasure and he hopes that their plans for the rest of the tournament will work as well as it did against Chile, who earlier in the day opened their account with a win over Germany.

“It was amazing going out there onto the pitch with the fans and everything, and we are just glad the plan went accordingly,” said Brown, adding that the team had prepared for the long day and will again do so on Saturday.

“We had our training session in the morning and then went back to the hotel to chill for a bit and had our recovery session. So, we jumped in the pool, relaxed a bit, had lunch as a team, and from then on some of the guys had naps, some chilled in the games room.

“Then we regrouped afterwards, and we planned for the game and came to the stadium. Ireland is a quality side, and we know what they are capable of. They have a lot of playmakers with the likes of Terry Kennedy and Jordan Conroy so if we can limit them with ball in hand and make them defend then we should be in for a good match.”