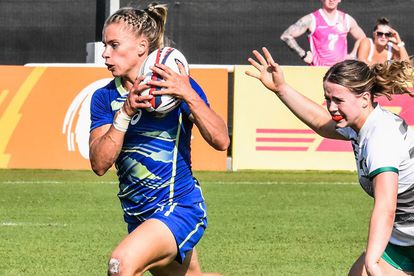 Roos, one of four players who played in the last HSBC World Rugby Sevens Series tournament in the Mother City in 2019, will lead a relatively inexperienced team in Cape Town – where they have been grouped in Pool A along with Australia, Ireland and Spain – with six players in line to make their debuts.

All of Kemisetso Baloyi, Jakkie Cilliers, Marlize de Bruin, Felicia Jacobs, Simamkele Namba and Aseza Hele are new to the World Series, although De Bruin and Namba played in Rugby World Cup Sevens at the same venue in September, and Baloyi and Jacobs were part of squads that played at the Commonwealth Games and Qualifier Series tournaments in England and Chile earlier in the year.

Cilliers and Hele travelled to New Zealand as part of the Springbok Women squad for the Rugby World Cup, but this will be their first journey into this level of sevens rugby, while Roos, Rights Mkhari, Liske Lategan and Lusanda Dumke are the sole survivors of the 2019 Cape Town Sevens squad.

Acting coach Renfred Dazel said it was an easy call to hand the captaincy armband to Roos after Mathrin Simmers and Sizophila Solontsi, who shared the captaincy in Dubai last weekend, were ruled out due to injury.

“Nadine is one of the senior players and she leads by example,” said Dazel.

“She has played enough rugby at this level to stay calm under pressure and is a good motivator as well. I know she will do an excellent job.”

For Dazel, the number of tournament newcomers is not a big deal: “We are putting things in place with the eye on the future and that is as important for this team as it is to do well in front of your home supporters.

“There are a number of tournaments next season, and this tournament will provide our players with a good feeling of the intensity required to be in the top tier of the game.”

ALSO READ | CAPE TOWN SEVENS: ALL BLACKS HAVE DOMINATED IN MZANSI – ALL THE NUMBERS

Dazel is not too phased about meeting World Series and RWC Sevens champions, Australia, first up.

Best in the world

“Come Friday afternoon, we will be up against the best team in the world,” he said.

“What a great opportunity that is for us as a group. Every player wants to compete against the best, every coach wants to be tested against the best team and we approach that game with that attitude.”

The Springbok Women’s Sevens played both Spain and Australia earlier in the year when they travelled to the France Sevens in Toulouse in May, losing 50-0 to the Aussies in their opening match before securing a well-deserved 21-19 win over Spain, with Roos scoring 16 of those points.

Roos said the captaincy is special and she is adamant that it will not affect her performances.

“I have been around the team for a while now and it is just great playing for them,” said Roos.

“To lead them at this occasion is really special to me and I will enjoy the moment. But ultimately, it is not about me, we are all in this together and my main aim will be to make sure every one of us play for the jersey and the team-mate next to you.”