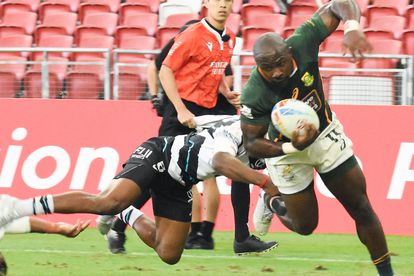 South Africa are the reigning XVs Rugby World Cup champions and Soyizwapi and company have a chance for a historic double.

Every time the Blitzboks step out on the park is the same for Soyizwapi who says this team chase the perfect game 100 per cent of the time.

“For us as a team we’re just chasing perfection. This is a standalone tournament, a massive tournament in front of our home crowd and we’re really excited for that.

“The fact that it is a knockout tournament doesn’t change the mindset for us. We focus on getting the perfect game and we focus on ourselves as a team and the standards that we uphold. We are chasing that perfect game from game one.

“To be double would champions [alongside South Africa Men XV] would be massive. It would be great for the nation. We all know what rugby can do for our country. This our first home sevens rugby since 2019 here in Cape Town so as players and a team, the whole system is excited to run out there this weekend and represent our country. We know how the crowd can get behind us and the fans will really make this tournament. As a team we are really excited.”

This will be the first time an RWC event has been staged in South Africa since the famous 1995 RWC.

“Rugby World Cup in South Africa created one of the most iconic images the game has ever known,” World Rugby Chairman Sir Bill Beaumont said.

“Now for the first time since that unforgettable day in 1995, we are delighted to be staging another Rugby World Cup back in the rainbow nation as rugby sevens comes to Cape Town with 40 teams from all corners of the world in action.

“Fans can expect to see the best men’s and women’s players, playing exciting, highly skilled, fast paced rugby sevens with all the jeopardy of the knockout format, where every game counts. This weekend players and supporters will create memories that once again shape our sport for years to come.

“Since gaining Olympic status rugby sevens continues to grow and entertain new fans around the globe. Played in a full, iconic stadium with a festive atmosphere, Rugby World Cup Sevens 2022 will be the perfect showcase for everything this vibrant sport has to offer.”