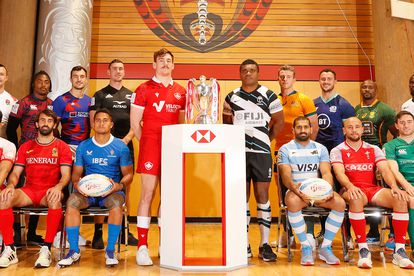 You’ll have to set your alarm should you wish to watch the Blitzboks play LIVE at the Vancouver Sevens this Easter weekend. Photo:: Mike Lee – KLC fotos for World Rugby

You’ll have to set your alarm should you wish to watch the Blitzboks play LIVE at the Vancouver Sevens this Easter weekend. Photo:: Mike Lee – KLC fotos for World Rugby

You’ll have to set your alarm should you wish to watch the Blitzboks play LIVE at the Vancouver Sevens this Easter weekend.

The Springbok Sevens team have gone from the stifling humidity of Singapore to training in the snow in Canada – all in the space of seven days!

By their own admission, the Blitzboks underperformed at last weekend’s Singapore Sevens were they lost consecutive matches to the USA, Fiji and Argentina to finish joint-seventh overall.

That was by some distance their worst performance of the World Rugby Sevens Series 2022 to date.

They will be looking to bounce back this Easter weekend in Vancouver where they are the defending champions.

The Blitzboks find themselves in Pool C alongside Australia, Spain and Canada for the tournament which runs from 16-17 April.

READ | BLITZBOKS SEND SOS TO 3 PLAYERS AHEAD OF VANCOUVER SEVENS

The Blitzboks will begin their title challenge against Spain at 20:15 (SA time) on Saturday, 16 April, before taking on Canada at 23:26 (SA time).

Die-hard supporters will have to set their alarms for 03:33 (SA time) on Sunday, 17 April should they wish to watch the Blitzboks take on Australia LIVE in their final Pool C match.

Australia, who finished third overall in Singapore, will be the Blitzboks’ sternest test, while Spain are an up-and-coming side and Canada will be buoyed as tournament hosts, but shouldn’t prove too much of a problem in overcoming.

Pool A will see Fiji, USA, Kenya and England face one another, while New Zealand, Samoa, Wales and Japan have been grouped in Pool B.

Finally, Ireland, Argentina, France and Scotland will duke it out in Pool D.

The Vancouver Sevens will be the sixth of nine rounds in this season’s World Rugby Sevens calendar.

After five rounds South Africa lead the way on 98 points having won four of the previous tournaments, with Australia and Argentina are tied on 83 with Fiji seventh (46 points) and New Zealand 16th (19 points).

TOP 5 TEAMS IN THE STANDINGS

Mixed vegetable chips: When you’re in need of a guilt-free crunchy snack