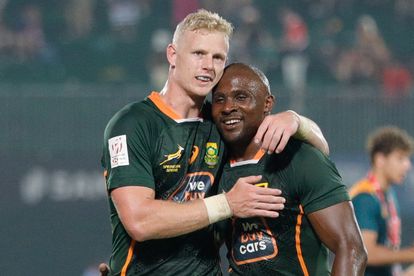 The Blitzboks completed an incredible comeback to win their Dubai Sevens Cup semi-final 26-19 against New Zealand and will now face Ireland in the gold medal match on Saturday.

With the scores level at 19 apiece and time up on the clock, Shilton van Wyk scored the match-winning try one minute into stoppage time to send the Blitzboks into a fourth straight final at the Dubai Sevens.

The Blitzboks will now take on Ireland, who beat the USA in the first semi-final, in the Cup decider at 17:26 (SA time).

South Africa failed to make improvements on defence, as New Zealand split the Blitzboks defence apart at will and were rewarded with two quick-fire tries by teenager Caleb Tangitau. Up to that point, the Kiwis had played with excellent continuity and fluidity, while the Blitzboks failed to pose any sort of threat with ball in hand.

But at the turn, there was also a turn in fortunes. When Zealand slapped the ball down from the restart, it fell fortuitously for Muller du Plessis and he back himself and raced clear to score.

Captain Siviwe Soyizpwai then came up big with another clutch play when the occasion demanded it. With New Zealand looking to launch again, Soyizwapi made a brilliant steal on the ground, initiating a counter-attack that was finished off by the lively Ricardo Duarttee to put the Blitzboks ahead by two.

But their joy was short-lived as a basketball-type step-back fade and lob undid the Blitzboks defence, allowing the Kiwis to run the length of the field to regain the lead.

There were more twists in the offing though. New Zealand conceded a yellow carded and had to finish the game with six players. Veteran Branco du Preez powered over the line from close range to draw South Africa level again. And although the conversion was missed, the Blitzboks had time for one more play to get the win.

And play they did. They raced into New Zealand territory from the restart before Van Wyk’s heroics sent the Blitzboks into the gold medal final and the Kiwis crashing out.