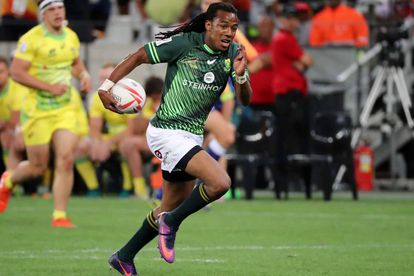 The Blitzboks squad for Rugby World Cup Sevens 2022 has three bronze medalist survivors from 2018 it was revealed as the squad was announced.

Siviwe Soyizwapi – who will lead the team – Selvyn Davids and Ryan Oosthuizen will bid to improve in their second Sevens World Cup outing.

This one for Afrika

Stalwart Cecil Afrika was recalled to the Blitzbok side.

The Blitzboks have a familiar look to it with 10 players who were in action at the recent Commonwealth Games in England, where they won the gold medal, with only Dewald Human and Zain Davids absent due to injury.

The duo, who also played in the 2018 tournament, picked up injuries at the LA Sevens last weekend, the last tournament of the 2022 HSBC World Rugby Sevens Series, with the Blitzboks finishing second on the overall log standings.

Afrika – the all-time leading Blitzbok points’ scorer in the World Series with 1462 points – was recalled due to Human’s injury. The experienced flyhalf last featured for South Africa in the World Series in 2020, but he has been playing for Monaco in the professional Extenso Super Sevens league in France in recent months.

Blitzboks Coach Neill Powell was happy to welcome back Afrika, who missed out in 2018 due to injury after making his RWC 7s debut in Moscow in 2013, and said: “We had been in regular contact since Cecil left Springbok Sevens to first play professional rugby in the USA and now France, so I am up to date with his fitness and form.

“The injuries to Justin Geduld earlier this year and now Dewald Human left us short of options at flyhalf and Cecil not only provides massive experience, but big match temperament as well. He will also take some of the work-load away from Selvyn Davids, who is coming back from injury.”

Davids, Ronald Brown, Christie Grobbelaar and Mfundo Ndhlovu all make a timely return to the squad, having missed the tournament in Los Angeles due to injuries sustained at the Commonwealth Games in July.