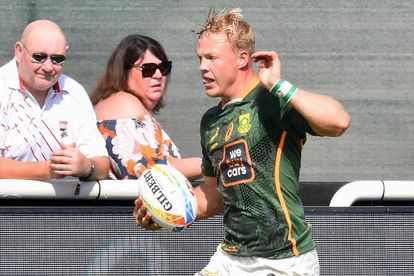 JC Pretorius in action for the Blitzboks against Kenya. Image: Blitzboks/Twitter.

JC Pretorius in action for the Blitzboks against Kenya. Image: Blitzboks/Twitter.

JC Pretorius starred as the Blitzboks inflicted a 27-12 defeat on Kenya at the Dubai Sevens on Friday.

The Blitzboks came into this match on the back of a demoralising 14-5 loss to Great Britain, a result that not only snapped their 19-game win streak in Dubai, but also put their bid for the title in jeopardy.

But the Blitzboks’s produced a typical Blitzboks performance to keep alive their playoff aspirations. South Africa’s attacking prowess was on full display, as were their clinical execution, strong defense and their breakdown superiority.

Pretorius was again the man that sparked the South African team to live. The live-wire forward scored the opening try as early as the second minute, before teammates Ryan Oosthuizen and Impi Visser powered over give to the Blitzboks a 17-0 lead at the break.

ALSO READ: Dubai Sevens — Blitzboks aim for a perfect 10 in the desert

Kenya made the better start to the second half between the two sides, with Tony Omondi breaching South Africa’s defence to get his team on the board. But two more scores — by Dewald Human and debutant Ricardo Duarttee — put South Africa firmly in control and back in the race for the title.

There was one more try for Kenya, but it was a mere consolation for them as their African neighbours had already done enough to seal the victory.

The next Blitzboks challenge

The defending champion Blitzboks will play their final Pool A match against Australia — who are the World Rugby Sevens Series champions — at 6:33pm South African time on Friday. The South Africans have to beat the Aussies to be assured of a place in the playoffs. If not, they will have to hope that other results in Pool A go their way.