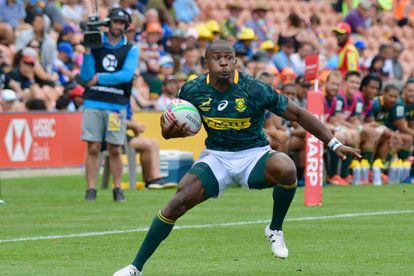 Experienced playmaker Selvyn Davids has been called up to replace the injured Angelo Davids in the Blitzboks team for the HSBC Canada Sevens tournament at the Commonwealth Stadium in Edmonton this weekend.

Davids, who was named in the HSBC World Rugby Sevens Series Dream Team in 2020, will join the Blitzboks in Edmonton on Thursday after Angelo Davids was ruled out after suffering a hand fracture in last weekend’s tournament in Vancouver.

Selwyn in for Angelo

The injured winger set a new individual try-scoring record for the Vancouver event with 10 tries, but is on his way back to South Africa after a scan confirmed the bad news for the team and Angelo Davids, one of four Blitzboks included in the Vancouver tournament’s Dream Team.

Selvyn Davids just missed out on the original trip due to injury two weeks ago, but has since fully recovered and his playmaking abilities and general presence will be a welcome boost to the squad, who won the title in Vancouver in impressive fashion.

For the 27-year-old, it was an unexpected surprise to get the call, making up for the disappointment of missing out on the original trip.

“It is never nice to replace someone who suffered injury, so I feel for Angelo, especially after such a fine performance in Vancouver,“ Selvyn Davids said.

“I am pretty excited to join the guys, especially since the disappointment of not recovering in time to travel with them originally. They have played wonderful rugby in Vancouver, and I know the guys will be keen to keep that high standard of play going.”

Selvyn Davids is keen to play again, especially after his participation in the Olympic Games was cut short after a high tackle in South Africa’s quarter-final against Argentina in Tokyo.

“I am feeling fit and strong and ready to play and join up with the brothers again. It will make up the disappointment suffered in Tokyo,” Davids said.

The Blitzboks will enter the tournament as first seeds and will face Mexico, Hong Kong and Canada in Pool A. Pool B consist of Kenya, USA, Spain and Chile, while Great Britain, Ireland, Germany and Jamaica will contest Pool C.