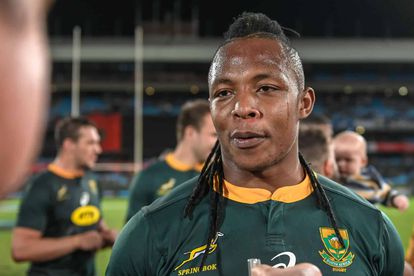 Springbok wing Sbu Nkosi is set to miss Saturday’s Test against Wales in Cardiff due to passport and visa issues.
Photo: Christiaan Kotze/BackpagePix

Springbok wing Sbu Nkosi is set to miss Saturday’s Test against Wales in Cardiff due to passport and visa issues.
Photo: Christiaan Kotze/BackpagePix

Many of the players who have donned the famous green and gold for the past two years will be waiting with bated breath with the announcement of the Springboks World Cup squad drawing near.

Coach Rassie Erasmus has had a thorough look at what he has at his disposal, shuffling his charges throughout the Rugby Championship campaign, as well as the one-off Test against Argentina played on Saturday at Loftus Versfeld.

One man who made a good case for himself is winger Sbu Nkosi, who has grabbed the limited opportunity handed to him in the past month.

The Sharks flyer scored a try in the Rugby Championship opener against Australia at Ellis Park, and did not feature in the away leg, with Makazole Mapimpi and Cheslin Kolbe preferred on the wings.

Against the Pumas on Saturday, he churned out what was perhaps his finest performance in national colours, scoring a brace of tries to walk away with the man of the match performance.

According to Erasmus, the 23-year-old is a certainty for the 31-man squad that will travel to Japan next month.

“The other games are finished now and we only have the warm-up game against Japan and Sbu will make the 31-man squad.”

Rassie Erasmus is set to assemble his squad of 37 for another training camp in Bloemfontein before they jet off to Japan.

The squad will later be trimmed, with the final announcement made on Monday, 26 August.

“We will choose the final squad of 31 from that group,” said Erasmus.

“There were one or two players that had question marks over them, and there were somewhere we got confirmation and others where we had doubts and things clarified. But we will have a proper sit-down tomorrow.”

Equally impressive was regular skipper Siya Kolisi, who went beyond what was initially planned on his return from a long injury lay-off.

“We wanted to get Siya off after 30 minutes and see how he would last, but with the injury to Marcell Coetzee we had to change our plans,” said Erasmus.

“At halftime, Siya said he was feeling great and that he wanted to go 70, but then he was struggling after 50 minutes. We’ll work hard on his conditioning and get him right.”

The Boks kick off their World Cup campaign against the All Blacks in Yokohama on 21 September.