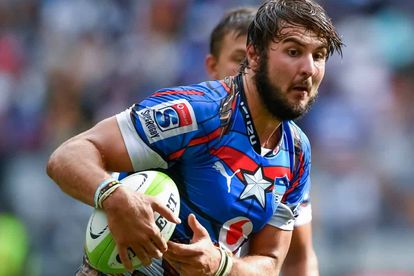 Lood de Jager (C) of the Bulls in action during the during the Super Rugby, #SuperHeroSunday match between DHL Stormers and Vodacom Bulls at Cape Town Stadium. PHOTO: Anton Geyser/Gallo Images

Lood de Jager (C) of the Bulls in action during the during the Super Rugby, #SuperHeroSunday match between DHL Stormers and Vodacom Bulls at Cape Town Stadium. PHOTO: Anton Geyser/Gallo Images

De Jager will join the club later this year, exactly when will depend on whether he is part of Rassie Erasmus’ Springbok World Cup squad.

An imposing presence both in the lineout and as a ball carrier, De Jager established himself in the Springbok team while still at the Cheetahs, and won player of the year at SA Rugby’s 2015 awards.

De Jager has been capped 38 times by the Springboks since making his debut as a 21-year-old, back in 2014.

Sale Sharks have signed Springbok flyhalf, Robert Du Preez and hooker Akker van der Merwe from the Cell C Sharks already this year while Faf de Klerk has been at the club since 2017 making 42 Premiership appearances. De Klerk recommitted to the club earlier this year.

Bok centre Rohan Janse van Rensburg joined the club at the same time as De Klerk but has made just 20 appearances.

De Jager’s departure comes as a blow to a Bulls outfit that has struggled to settle on a lock pairing in 2019 thanks to a string of injuries, including one to the lock himself.

The Sale Sharks greatly prize the physicality that De Jager will bring to their pack.

“I am extremely pleased to secure the services Lood for the 2019/20 season. He is a world class line-out operator with lots of experience at the highest level and offers a huge physical presence around the pitch. Lood’s signing is a statement of intent in our endeavour to become a force in the Gallagher Premiership and Europe over the next three years,” Steve Diamond, Sale Sharks Director of Rugby, proclaimed.

De Jager is excited by the prospect of turning out for a highly professional outfit like the Sale Sharks.

“Firstly it is a great honour for me to join Sale Sharks, they are a club with great tradition and really high ambitions and they are building something really special. It’s exciting to be a part of and I’m looking forward to joining up with the guys in Manchester later in the year,” he said in a release issued by Sale Sharks.

De Jager will arrive in Manchester in August if he is not selected for the RWC. Should he make the Springbok group he will join after the World Cup.