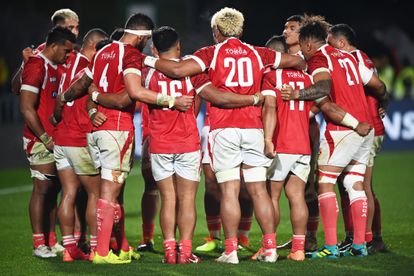 Tonga have qualified for the 2023 Rugby World Cup completing the lineup of the tournament’s Pool B alongside the Springboks.

The Springboks also share the group with fellow URC nations Ireland and Scotland who have qualified for the tournament on the basis of ranking.

Romania endured a dramatic qualification process that concluded with a disciplinary process against Spain, who had initially gained the place in Pool B.

The Oaks faced the Springboks at the 1995 Rugby World Cup in a match that turned into a real grind for the eventual winners.

Tonga join the Springboks in Pool B

Tonga booked their place by virtue of a comfortable victory over Hong Kong over the weekend.

Scrumhalf Sonatane Takulua scored a hat-trick in the match and admitted afterwards that Tonga were relieved to reach the World Cup.

“I’m lucky enough to have got three tries but it wasn’t just me — it was the effort from all the boys,” Takulua said.

“To get the win tonight is a big relief.”

In perhaps another good omen for the Springboks, Tonga were in their group the last time the RWC was in France and South Africa went all the way on that occasion.

Tonga gave the Springboks an almighty scare in that group game, pushing them all the way in a 30-25 victory for the men in green and gold.

The islanders have won just one match at each of the last two tournaments and aren’t expected to mount a serious challenge for progression.

They will bring a physical presence that could give even the best teams some uncomfortable moments.

The next edition of the Rugby World Cup kicks off on 8 September 2023.