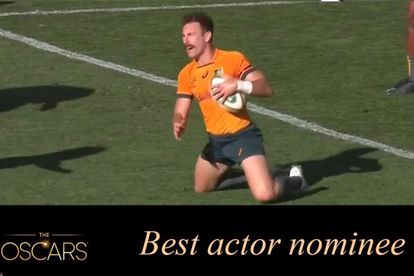 Nick White has copped plenty of stick on social media after many argued he milked a yellow card after an incident involving Faf de Klerk, which has been a major talking point after last Saturday’s match.

While the Springboks had a woeful day at the office in Adelaide, their efforts were not helped by a series of questionable calls from New Zealand referee Paul Williams.

One of those came after White’s theatrics late in the first half while Australia were camped on their own tryline. With time running out, Springbok scrumhalf Faf de Klerk tried to knock the ball out of White’s hands at a scrum, but instead made contact with his face.

Williams ultimately saw enough to send the blonde No 9 to the sin-bin for 10 minutes, and at half-time, Butch James, in-studio for SuperSport, was quick to slam White, suggesting that he deserved a yellow card.

However, Nick Mallett – also on SuperSport duty – disagreed in part with his fellow commentator, saying: “What is Faf trying to do though? You can’t knock the ball out of a scrumhalf’s hands, you’re not allowed to. He’s not tackling the guy so what on earth is he doing. I mean it’s stupid enough to have a swinging arm, and he opened himself up to that.”

In his column for Sport24, Mallett further elaborated on this point.

The Nic White issue has been in the headlines, and I think that what would have served rugby best in that instance was a yellow card to Faf de Klerk, but also a yellow card to White for unsportsmanlike conduct and bringing the game into disrepute.

I’m not quite sure what Faf was trying to do, and I don’t understand why he was swinging his arm like that with a closed fist. I don’t think you can complain about his yellow given he made contact with the player’s face.

The way in which White milked the penalty and dived to the ground in a soccer-like fashion, however, is not what you want in rugby, and it is completely understandable that people are so angry.

The only way referees are going to manage to get it out of the game is if they yellow card a player who they deem has overreacted and is trying to buy a penalty. If you swear at a referee, he can send you off for that, and this is just a different form of gamesmanship that I don’t think should have any place in the sport.

Nic White will start in an unchanged Wallabies XV