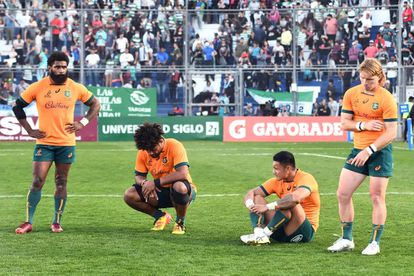 Argentina gained revenge on Australia for last week’s defeat with a seven-try bonus point 48-17 victory in the Rugby Championship on Saturday.

Tries from Juan Imhoff, Jeronimo De La Fuente, Juan Martin Gonzalez, Emiliano Boffelli, Tomas Albornoz and two from Thomas Gallo helped Michael Cheika’s Pumas to a convincing victory and even took them to the top of the table after their first win in the competition since 2020.

To add to the party atmosphere, Agustin Creevy came off the bench to equal Nicolas Sanchez’s record of 94 Pumas caps.

Argentina had wilted in the final quarter in Mendoza a week ago but this time they did not just hold on in San Jaun but romped away in the closing minutes.

They were off to a dream start as Imhoff scored his first Pumas try since a brace against Ireland in the 2015 World Cup quarter-finals.

He took the ball on the left wing before chipping ahead and chasing.

Australia seemed to have the danger covered but full-back Tom Wright spilled the ball into Imhoff’s arms and the veteran wing raced clear to score with exactly 60 seconds on the clock.

The Pumas needed less than five minutes to score a second try following a stunning 50:22 kick from Santiago Carreras.

Argentina claimed their own line-out and a few phases later Gallo burrowed over under the posts.

Boffelli kicked both conversions but Australia were soon on the scoresheet.

Last week, the Wallabies enjoyed great success with their rolling maul and gave up several kickable penalties to instead kick to the corner for a close range line-out, scoring four tries off powerful drives.

They did it again on Saturday and once again Argentina were unable to defend their line as captain James Slipper barged over on 12 minutes.

Attacks were clearly on top and five minutes later the returning James O’Connor kicked a penalty from under the posts as Australia chipped away at Argentina’s lead.

O’Connor then had a try ruled out for an illegal clear-out by Slipper in the preceding ruck.

Pumas centre De La Fuente was next to cross the whitewash with a jinking run through Australia’s midfield, despite seemingly pulling his hamstring before crashing through two tacklers to score.

Argentina could have had another try but Boffelli was adjudged to have spilled the ball over the line as he was tackled by Marika Koroibete.

The hosts led 26-10 at the break but had blown a nine-point half-time lead in Mendoza a week ago.

Pumas scrum-half Gonzalo Bertranou saved a certain try early in the second period, stripping the ball from Australian hands in his in-goal area.

That was a crucial moment as Boffelli knocked over a penalty and then converted Gallo’s second try, again a short-range drive, to put the Pumas virtually out of sight.

But Boffelli added a sixth, outstripping Koroibete to dot down Lucio Cinti’s grubber, and then Albornoz latched quickest onto Tomas Cubelli’s chip ahead to put the icing on the cake.