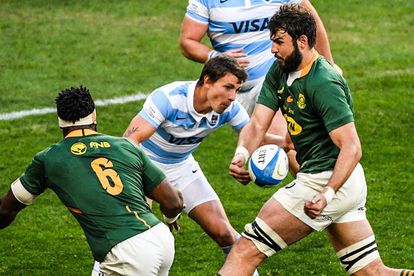 The Boks will take to the field against Argentina on Saturday evening knowing exactly what they need to do to clinch the Rugby Championship title.

New Zealand are odds on favourites to clinch the trophy after thrashing the Wallabies earlier on Saturday, and the Springboks could only edge in front if they beat Argentina by 39 points along with a try-scoring bonus point. The last time the Boks beat Argentina by 40 or more points was way back in 2013 in Joburg.

If teams finish level on log points, the determining factors will be most wins, then overall points difference.

If still level then the points difference in matches between the two teams will be the final deciding factor, which is at least in favour of the Boks.

Kick-off at Hollywodbets Kings Park on Saturday is at 17:05.