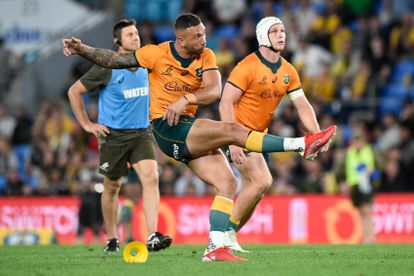 Quade Cooper will again wear the No 10 jersey for Australia in their Rugby Championship clash with South Africa. Photo by Matt Roberts/Getty Images

Quade Cooper will again wear the No 10 jersey for Australia in their Rugby Championship clash with South Africa. Photo by Matt Roberts/Getty Images

Argentina vs Australia live scores; The Wallabies and Pumas round off their Rugby Championship campaign on the Gold Coast.

Greg Holmes will become the oldest Wallabies player since World War II after being included on the bench for their clash against Argentina on Saturday, while Sean McMahon was another surprise call-up.

Now with the Western Force, he was brought into the camp by coach Dave Rennie to help out in Perth last month and has had such an impact that he has unexpectedly been given another chance.

Back-rower McMahon was also a shock inclusion on the bench, back for the first time since facing Scotland at Edinburgh in 2017 before taking a lucrative contract in Japan with Suntory Sungoliath.

That move ruled him out of further selection as an overseas-based player, but tweaks to the so-called “Giteau Law” now allow Rennie to select two foreign-based players with less than 60 Tests of experience.

“Both Greg and Sean have worked extremely hard on the field and around their detail off the field and they’re both super-excited to represent their country again on Saturday evening,” said Rennie.

“We’ve felt really well supported during all of our Tests in Australia this year and we’re looking to finishing the Rugby Championship with a performance the team and the country can be proud of.”

Their inclusion is another eye-opening move from Rennie, who stunned the rugby world when he re-called playmaker Quade Cooper earlier in the tournament after four years in the wilderness.

It proved to be inspirational with Cooper making a triumphant comeback at flyhalf.

He will start again for their re-match on the Gold Coast against Argentina, who are reeling after six players were ruled out of the clash for breaching coronavirus health orders, including tighthead prop Santiago Medrano and No 8 Pablo Matera.

Rennie made three changes to his run-on team, with Pete Samu forcing his way in for the first time this year.

He was named at blindside flanker while Jordan Petaia will start on the right wing with Marika Koroibete given the week off to spend time with his newborn child.

The only other change sees Darcy Swain rotate into the starting second row with Matt Philip shifting to the bench.

Australia are chasing four wins in a row for the first time in the Rugby Championship, while Argentina are looking to prevent a sixth straight defeat.