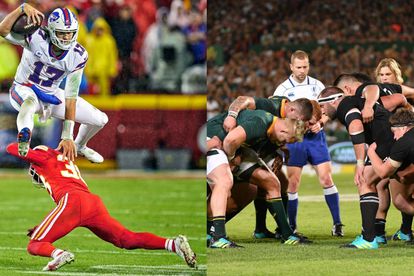 Rugby cannot compete with the NFL in the American market. Photos: Backpagepix/AFP

Rugby cannot compete with the NFL in the American market. Photos: Backpagepix/AFP

The failure of the United States rugby union team to reach the 2023 World Cup underlines that the mission to crack America is doomed to failure.

Outside of a niche group, rugby union’s 15-man code is not taking root in the United States.

Rugby can’t beat the NFL on their own turf

While rugby doesn’t need to steal fans from the NFL to grow in the United States the potential market for the sport is likely among people who enjoy gridiron.

The brutal physicality of both sports means that they will attract the same types of people as fans.

Rugby would love to attract NFL fans who spend an enormous amount of their hard-earned money on merchandise, tickets, betting and more.

However, the NFL is now culturally entrenched into Americans’ way of life.

Moreover, the NFL presents itself as the height of entertainment, while rugby broadcasts still look and sound pretty much the same as they did when the sport was amateur.

Gridiron is the better product

It would be a tough sell to convince any American that the broadcast or attendance of a rugby match is a better sports or entertainment experience than an NFL game.

Claims that rugby is all-action for 80 minutes don’t stand up to scrutiny as most matches in the sport suffer from the curse of reset scrums.

Rugby’s scrum is a huge weak point, not because it can’t be entertaining but because safety concerns have seen the forward battle become overlegislated and its handling has been left in the hands of officials who appear to have scant understanding of what is actually happening.

The NFL has its own officiating problems and controversies, but the zebras are not often at the centre of the action.

Rugby is just as stop-start as the NFL and a lot of time is consumed setting up for set plays after stoppages.

The way referees run modern rugby matches makes a mockery of claims that the sport is all-action.

The competition between rugby and NFL goes beyond the fans as the sport’s compete for athletes. Here the NFL is just streets ahead of rugby with a phenomenal talent pipeline that is the envy of almost every sport.

Rugby and NFL battle to make their game safer

Both rugby and the NFL have set out to make their respective sports safer as the link between contact sports and dementia looms large.

It would be a stretch to suggest either is losing fans over those efforts but plenty in both groups fondly remember days past when ignorance excused gladiatorial exhibitions.

Another way rugby is changing, is that hyper-coaching is ensuring that players are now more and more like NFL footballers carrying out elaborate set plays with clearly defined roles.

So rugby is drawing together with the NFL and trying to take some of its TV market and failing dismally.

The NFL provides a product that is clearly more appealing for Americans and is growing increasingly popular all over the world.

We might even see the NFL expand into Europe as soon as 2025, in a move that should put World Rugby on notice.