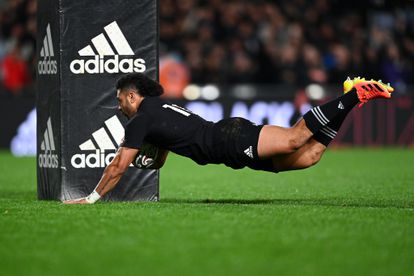 The All Blacks extended their remarkable unbeaten run at Eden Park to 45 Tests on Saturday when a stellar display by Richie Mo’unga saw them down the Wallabies at their Auckland fortress. Photo: Twitter @AllBlacks

The All Blacks extended their remarkable unbeaten run at Eden Park to 45 Tests on Saturday when a stellar display by Richie Mo’unga saw them down the Wallabies at their Auckland fortress. Photo: Twitter @AllBlacks

The All Blacks extended their remarkable unbeaten run at Eden Park to 45 Tests on Saturday when a stellar display by Richie Mo’unga saw them down the Wallabies 33-25 at their Auckland fortress.

Playing with a strong breeze behind them they were up 16-8 at half-time and opened up a 33-8 lead in the second half before the Wallabies finished with a three-try flourish.

While the All Blacks dominated for much of the game, it was a far from perfect performance.

There were problems at scrum time, they conceded 16 penalties in the match and Australia were able to control the closing minutes.

Coach Ian Foster said the start and finish did not go as planned but in between the All Blacks did enough to deserve the win.

“In the middle 50 I was delighted with the composure and at 33-8 we should have done better,” he said.

“But at the end of the day it’s a Bledisloe Cup series. We’ve put a stake in the ground, we’re 1-0 up and looking forward to next week.”

The Australians said before the match that if they could stay with the All Blacks for 60 minutes they were in with a chance, but the contest was over well before then.

“We’ve been a team that’s finished strong so far this year which is really pleasing. We’ve got plenty of heart,” captain Michael Hooper said.

“We’ve just got to do it for longer. They (New Zealand) had a couple of big moments there and then we were really chasing the game. We got some nice moments too but it was too much to chase.”

As has been a familiar pattern for the past 35 years, the Australians travelled to Auckland full of hope and left deflated.

Their chances of lifting the Cup off New Zealand in the best-of-three series look dim with the second Test also to be played at the All Blacks spiritual home.

Flyhalf Mo’unga stole the show with his direction of the All Blacks around the field to keep pressuring the Wallaby defence.

Before a near-capacity crowd of just under 50 000, Mo’unga capped his performance with an 18-point contribution from a 70-metre runaway try along with two conversions and three penalties.

It was a messy start to the game, particularly for the Wallabies who lost possession at four of their first five lineouts.

When their lineout settled, they gave away back-to-back scrum penalties which Mo’unga converted to have the All Blacks ahead 6-0 after the first 20 minutes.

After Noah Lolesio missed his first shot at goal the All Blacks won a ruck penalty for Mo’unga to further extend the lead.

Things clicked for the Wallabies at the half-hour mark when Lolesio was successful with a penalty and Allan Kellaway, promoted into the team when Marika Koroibete was stood down for a late-night drinking session, scored in the corner.

It was a well-worked move from a long lineout throw snapped up by centre Ken Ikitau who ran over Mo’unga before sending Kellaway away for the try.

But the All Blacks struck back on the stroke of half-time when they turned down a shot at goal in favour of a lineout drive and wing Sevu Reece burrowed into the forwards to score the try.

After Mo’unga, Havili and McKenzie scored their tries to open up a 33-8 lead, and the Wallabies finished with a flourish with two late tries to Tom Banks and one to Jordan Uelese.

The final score could have been closer had Lolesio managed more than one conversion.