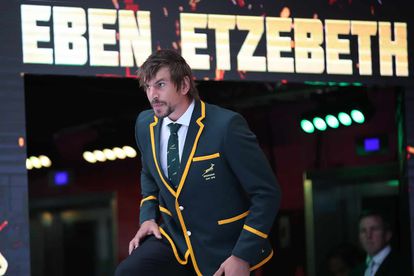 Earlier this month, the Sharks pulled off the massive signing of Etzebeth from French club Toulon, with deal officially confirmed to be a whopping five-year contract.

The powerful second rower has been on an incredibly lucrative contract with his French club, and he will have to take a pay cut at the Sharks, particularly considering that SA franchises have a R65.5m player salary cap this year.

Many outsiders may wonder how the star-studded Sharks managed to secure the signature of another high-profile player of this calibre, but in a one-on-one interview with The South African, Sharks CEO Eduard Coetzee previously revealed some of the factors that led to the successful completion of this deal.

“For one, Eben wanted to come back to South Africa, and we presented a plan that incorporated what he can hope to achieve both on and off the field at the Sharks. It was a holistic plan that I think counted in our favour. And of course there are a few of his national teammates at the Sharks, and I’m sure that helped as well,” Coetzee added.

According to Rapport, there are other key factors that enabled the Sharks to ‘legally’ recruit Etzebeth, primarily as a result of a R37-million cash buffer that they had built up over two years. Of course, it must also be remember that as a Player of National Interest, there is a contribution from SA Rugby that falls outside of the salary cap.

CLOSER LOOK: SO WHEN WILL EBEN MAKE HIS SHARKS DEBUT?

Coetzee said the Sharks had spent R37-million less than they could have on salaries in 2020 and 2021 as they went through a rebuilding phase.

With that carry-over and the support of investors MVM Holdings, they were now in a position to continue recruiting world-class players.

“The system allows you to transfer what you do not spend,” Coetzee commented. “So last year we had an extra R22-million for salaries. Our salary bill increased to R47-million, but we still saved about R15-million (after the salary cap was first increased to R61.9-million)

“Thanks to these credits, we can now contract high-profile players. We have spread the credits over 2022 and 2023, after which the cycle will end.”

Etzebeth will ‘join’ the Sharks from July

The deal with Etzebeth was also always expected to hinge on how badly the SA Rugby Player of the Year nominee wanted to return to South Africa, while his close relationship with Bok captain and good friend Kolisi is certain to have been another factor in favour of the Sharks.

When asked if Kolisi had perhaps helped in twisting Etzebeth’s arm, Coetzee just laughed and said: “I’m sure they’ve had some chats.”

The Sharks CEO added that they didn’t want to publicise the length of the contract at this point, but it is understood that Etzebeth has committed in the “long term”, while Coetzee reiterated that they had completed the signing within all salary cap constraints.

“Of course he’s not earning nearly the same as what he was in France, but there were lots of other reasons that he has agreed to join us.”

With the South African sides in the United Rugby Championship set to be eligible to qualify for the Heineken Champions Cup from the 2022/23 season, Coetzee has already made it clear that the Durban-based franchise will target the ultimate prize in due course.

“We do not just want to survive and rebuild all the time. MVM Holdings (the American consortium that has acquired a majority share in the Sharks) has given us faith in how far we can go, and they have the attitude that we must strive to be the best. With this in mind, we do want to win the Heineken Cup eventually, and I do not say that arrogantly. It is just part of our vision.”

These sort of ambitions would have surely appealed to Etzebeth, while the Sharks also recently launched a ‘Players First Programme’, aimed at providing various opportunities and support to holistically prepare players for life after rugby. It was a factor, for example, that Mbonambi has confirmed played a big role in his decision to join the Sharks.