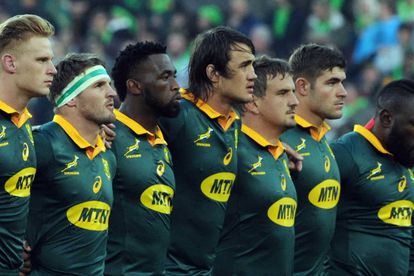 The Springboks ahead of a fixture at Ellis Park. Photo: Sydney Mahlangu /BackpagePix

The Springboks ahead of a fixture at Ellis Park. Photo: Sydney Mahlangu /BackpagePix

Argentina will be looking to maintain the momentum from the Jaguares’ remarkable Super Rugby season as they bid for a first-ever victory over New Zealand when the Rugby Championship kicks-off on Saturday. The squad features 13 Jaguares players.

Elsewhere, South Africa will host Australia at Ellis Park – a venue where they have a far superior record.

Here’s what you need to know about the weekend’s matches and how the results might impact the World Rugby rankings.

Australia will climb above South Africa if they win. This will see the Wallabies return to fifth for the first time since September 2018. South Africa, meanwhile, cannot improve their position of fifth even with an emphatic win.

Get the preview, prediction and head-to-head for South Africa vs Australia here.

Should the All Blacks lose, they will be knocked off the number one spot with Wales taking the honours. Argentina have never beaten New Zealand but will climb one place with a win, two if by more than 15 points.

Get the preview, prediction and head-to-head for Argentina vs New Zealand here.

Other stats worth noting