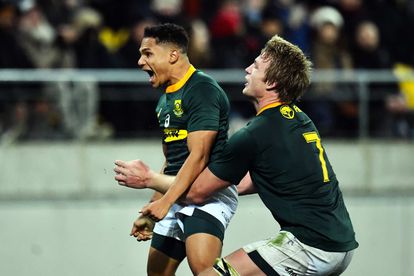 The Springboks have a chance of winning the 2019 Rugby Championship. They top the log after week two following a 16-16 draw against New Zealand in Wellington on Saturday.

Although the All Blacks were outplayed for most of the first half in Wellington they still managed to turn with a 7-6 lead, scoring their only try of the game just before the break.

But while they took control in the second half they were restricted to penalties as they built a 16-9 lead.

Then, in a reversal of the first half, the game ended with the Springboks storming back.

Jantjies grabbed a bouncing ball to score his try in the final minute, with Handre Pollard kicking the conversion under pressure to leave the scores level.

As the Springboks celebrated, the All Blacks were distraught with captain Kieran Read saying it felt like a loss.

Australia beat Argentina in the other fixture on Saturday, but it’s the Boks’ bonus point win that ensures they have the slight edge heading into the final round of fixtures next weekend.

South Africa will travel to Argentina while Australia and New Zealand slog it out in the final round of matches in this year’s shortened competition.

Watch the highlights for New Zealand vs South Africa here.

Watch the highlights for Australia vs Argentina here.

Australia recovered from last week’s defeat to beat Argentina 16-10 in the Rugby Championship on Saturday, giving scrum-half Will Genia an emotional send-off in his final Test in Brisbane.

After a disappointing 35-17 loss to South Africa last weekend, the Wallabies gave Genia a fitting farewell at his home ground prior to his retirement from Tests after the Rugby World Cup.