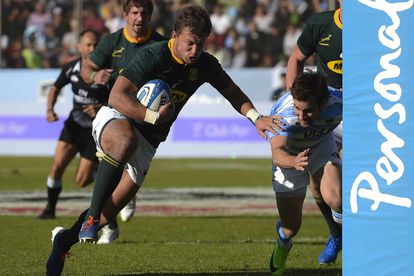 The Springboks continued their surge ahead of the 2019 Rugby World Cup and held their nerve to beat Argentina 13-46 in Salta on Saturday.

The win sealed top spot in the 2019 Rugby Championship for the Boks. They had beaten Australia with a bonus point in the opening game and then held New Zealand for a draw in the second round of matches.

The Wallabies beat the All Blacks in Saturday’s early game, which briefly sent them to the top of the table. However, South Africa knew exactly what they needed to do to clinch the title. They did all that and more.

While it is technically the first time that the Boks have won the Rugby Championship, they last won the Tri-Nations as the competition was previously known, a decade ago.

The win comes at a time where there is renewed hope for the Boks, a team many wrote off as being at their lowest ebb just over a year ago. Coach Rassie Erasmus has maintained that the team is a long way off the finished product. And while that might be true a bit of silverware will leave a glint in the eye of many supporters.

No side who has won this competition has also lifted the Webb Ellis Cup in the same year, though.