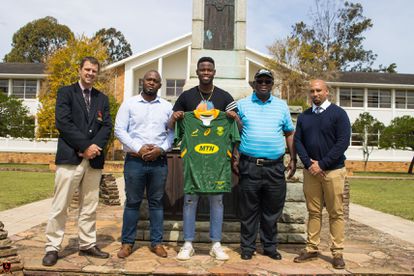 Springbok utility back Aphelele Fassi returned to his former high school, Dale College in his hometown of Qonce on Friday.

Fassi handed over a Springbok jersey for the school to frame, while also being pictured speaking to the current Dale scholars. “Weekend Special” as he is affectionately known as, spent his entire high school career at the school and went on to play three years of first team rugby before matriculating in 2017.

Although he has since specialised and rebranded as an electrifying full back for the Sharks and a rapid yet clinical winger for the Springboks, Fassi played quite a number of other positions while donning the famous red and black striped Dale first team rugby jersey. The 23-year-old was no stranger to wearing jersey’s number 10 and 12 to equally devastating effect for the school too in his heyday.

Those particular displays and his versatility are undoubtedly the reason why the Sharks snapped Fassi up for their famed academy. It wouldn’t take long for the lanky star to emerge from the academy and get a run of games in senior rugby for the union, through the now defunct Supersport Rugby Challenge. From there, he earned promotion to the Currie Cup side, where even more impressive performances saw him earn a Super Rugby call up.

Fassi’s progression from within the Sharks

It wouldn’t take long before Fassi established himself as the Sharks first choice full back, in Super Rugby where the calibre of his performances had been South African rugby lovers crying out for his inclusion in the Springbok set up. He was perhaps unlucky that after starting the initial 2020 Super Rugby campaign like a house on fire, the tournament got curtailed due to Covid-19.

Nevertheless, Dale College would finally get its Springbok as Fassi made his debut in the much coveted green and gold, against Georgia earlier this year. He would then go on to mark that occasion with a try.  He would then follow that up with another try in his second test against Argentina in the Rugby Championship.

Message from the school

“Our Springbok and Old Dalian (Class of 2017) Aphelele Fassi visited the school today. He’s still proud of his Dale College roots. He played for the school’s first rugby team for three years, while captaining them in 2017.

We are extremely proud of the great strides Aphelele has shown to the world.

Fassi joins an impressive list of recent Dalian Springboks which includes the likes of Bjorn Basson, Aphiwe Dyantyi, Keagan Daniel and Bandise Maku. Here are the pictures below courtesy of Dale: