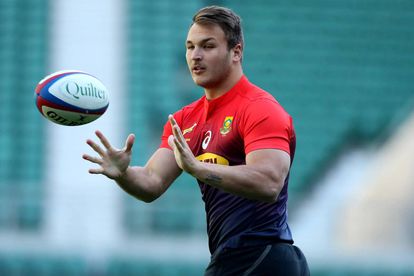 Andre Esterhuizen is back for the Boks. Photo: Archieves

Andre Esterhuizen is back for the Boks. Photo: Archieves

At the start of 2022, Esterhuizen has displayed sensational form for English club Harlequins, which has seen him secure a regular sequence of Man of the Match awards.

According to Sunday newspaper Rapport, Esterhuizen was among a group of overseas-based players who have begun to be involved in alignment camps, while he has met with Bok coach Jacques Nienaber.

The burly centre last played for the Boks in August 2019, and could be offer all-important back-up to incumbent inside centre Damian de Allende.

Esterhuizen recently sat down with the studio panel of SuperSport’s First XV programme, and revealed that he had received some good news.

“I didn’t have any conversation with them for quite a while, I think, since the camps just before the British & Irish Lions series,” said Esterhuizen.

“Just after this last game (earlier in the season), I got a message that he (Nienaber) is saying that I played well.

“It’s [great news]… There are a lot of teams overseas who want to keep their players, obviously, but they want you to get into international sides as well,” added Esterhuizen.

“I’ve gotten massive support from the coaching staff, and everyone tries to make everyone better, so we can all maybe get into an international side.

“It’s everyone’s dream to play for their country, and I’d love to for them again. Let’s wait and see.”

Esterhuizen has consistently been in impressive form for his English club, and there are growing calls for him to be recalled to the Springboks in 2022.

The 27-year-old last played for the Springboks in 2019 (earning his eighth Test cap against Argentina), but missed out on World Cup selection, and has not really been in the national frame since then.

However, there is good reason to believe that Esterhuizen could soon be back in the Bok mix should he continue to perform at such a level for Harlequins.

READ | BOKS FINISH THE YEAR AS THE NO 1-RANKED TEAM