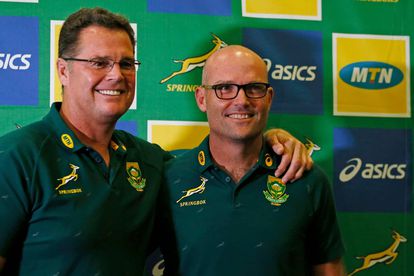 Newly appointed Springboks head coach Jacques Nienaber(R) and the Director of South African Rugby, Rassie Erasmus (L) pose for a picture following his announcement as the Springbok head coach at the Southern Sun Hotel in Pretoria on January 24, 2020. (Photo by Phill Magakoe / AFP)

Newly appointed Springboks head coach Jacques Nienaber(R) and the Director of South African Rugby, Rassie Erasmus (L) pose for a picture following his announcement as the Springbok head coach at the Southern Sun Hotel in Pretoria on January 24, 2020. (Photo by Phill Magakoe / AFP)

In a ground-breaking initiative piloted by SA Rugby’s Rugby Department, the Springbok and Blitzbok coaches have started to share their expertise online and in real time with a large number of coaches across the country, during the COVID-19 lockdown period.

On Friday, the second webinar in the series was hosted by Ashley Evert, the Blitzboks’ Team Manager and a former SA Under-20 and Vodacom Blue Bulls forwards guru, who conducted a lineout throwing session.

The coaches dialled into the 65-minute online sessions from within the comforts of their homes from all over South Africa. The presentations lasted approximately 45 minutes and were followed by 20-minute interactive Q&A sessions.

Over the course of the next three weeks, Rassie Erasmus (Director of Rugby), Jacques Nienaber (Springbok coach), Neil Powell (Blitzbok coach) and both national teams’ assistants will take turns to present their area of expertise with the group.

Erasmus praised the initiative as a breakthrough in their effort to communicate simultaneously, and on a large scale, with local coaches across South Africa.

“Hilton Adonis (Manager: Training and Education) and Louis Koen (Manager: High Performance Programmes), as well as their other colleagues who worked hard behind the scenes, must be commended for getting this initiative off the ground,” said Erasmus.

“The pilot webinar was a great success and created a lot of excitement among the coaches. This platform will enable us to continue with the training and education of our coaches even though we are in a period of self-isolation at the moment.”

According to Adonis, online coaching was earmarked as a key priority for 2020, and that their plans to rolling out the web-based seminars were now accelerated by the national lockdown.

“We realized last year that formal learning, complimented with online presentations, is really the way of the future and we therefore planned to roll out a series of online seminars throughout the year,” said Adonis.

“The national period of isolation has opened an opportunity for us to launch a series of pilot coaching seminars, with Deon Davids presenting the first one on Wednesday.”

Adonis said the target group of this online gathering was schools coaches, specifically those responsible for the current intake of Under-16 and Under-18 players in SA Rugby’s Elite Player Development programme (EPD).

“These coaches are responsible for the coaching of around 60 U16 and 75 U18 players who are currently enrolled in our EPD programmes, so we thought it would be a starting point,” he said.

“The feedback we received from the guys was very positive. They absolutely loved the idea to get involved and to make use of the opportunity to learn from South Africa’s best coaching personnel.

“They sent plenty of messages through WhatsApp and email to express their gratitude and their excitement. Many said they were so motivated after the session and they are now looking forward to the next instalments.”