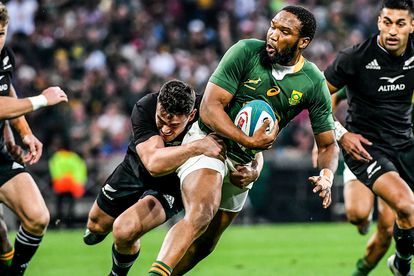 Springboks centre Lukhanyo Am has been confirmed as one of nominees for the 2022 World Rugby Men’s 15s Player of the Year.

Despite Am having suffered a serious injury midway through the Rugby Championship, he has been nominated alongside France’s Antoine Dupont as well as Ireland’s Johnny Sexton and Josh van der Flier.

The 28-year-old was in sensational form before suffering his knee injury, with the highly-regarded centre having played in five Tests this year.

However, there is no doubt that Dupont will be the favourite to walk away with this award.

Fans can cast their vote on social media and select their winners for the two International Rugby Players Men’s and Women’s Try of the Year categories until Thursday, 17 November at 23:59 GMT.

Twelve countries are represented among the nominees in Australia, Canada, Chile, England, Fiji, France, Italy, New Zealand, Scotland, South Africa and Wales, with Ireland having the most representatives with eight. Australia are also rewarded for their performances on the HSBC World Rugby Sevens Series and at Rugby World Cup Sevens this year with five nominees in the Men’s and Women’s Sevens Player of the Year categories.

Returning to a physical format for the first time since the pandemic, the 22nd World Rugby Awards will be handed to their recipients on 20 November from 19:30 CET.

Stars and legends from 15s and Sevens will gather in the iconic Salle des Étoiles for a magnificent ceremony under the High Patronage of HSH Princess Charlene of Monaco.