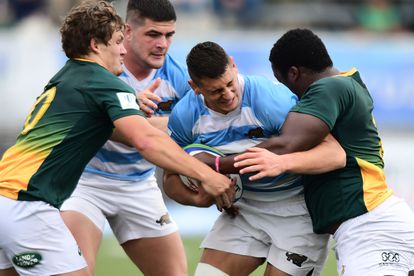 The 20-year-old back rower, formerly of the Jaguares, made his international debut for Argentina earlier this year – coming off the bench to score a try against Romania – and has since gone on to feature in four Rugby Championship fixtures for his country, including outings against Australia and New Zealand.

In signing for Irish, Gonzalez Samso joins fellow Argentineans Agustin Creevy and Facundo Gigena at Hazelwood – and he’s excited about linking up with his new team-mates next month.

“It’s an exciting opportunity for me,” he said, “I’m looking forward to linking up with the squad.

“I’ve always wanted to play club rugby in Europe – the English league has always fascinated me.

“It’s an exciting time to be joining London Irish.”

Ahead of his arrival in mid-November, Exiles’ Director of Rugby, Declan Kidney, welcomed Gonzalez Samso, commenting: “Juan is a young player with great quality.

“He’s already a full international and will certainly strengthen our back-row options.

“He’s excited to come and play here, he was really keen on the move – so we can’t wait for him to join us next month.”

Warning: Very COLD weather is expected on SUNDAY in parts of SA