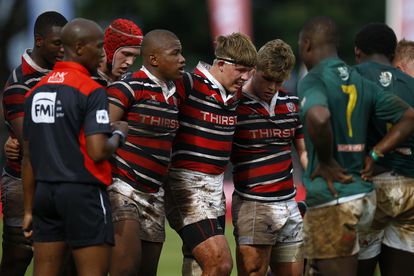 This weekend’s featured Premier Interschools is the KwaZulu-Natal derby between Glenwood and Maritzburg College at Colleges’ famous Goldstones field in Pietermaritzburg on Saturday, 13 August.

The first match between the two schools was played in 1921 at Glenwood, which was won 5-0 by Glenwood. College dominated the earlier exchanges from then and has their current winning margin thanks to great teams during the 50’s, 60’s 70’s and 80’s.

Since the late 90’s Glenwood has developed into a real rugby powerhouse and have been so dominant the last 10 years that College could only manage one win and 2 draws in the 16 matches played. They did not get to play in 2020 due to the pandemic, but did manage to play two matches in 2021, which resulted in in a win for each team away from home.

READ | HAS IAN FOSTER LOST HIS MIND? ALL BLACKS TOOK A ‘STEP UP’ HE CLAIMS!

Early season form looks to favor Glenwood once again, but form alone is not always the key to winning such fierce derbies. Passion and willpower sometimes get surprising results. College showed against Affies they have plenty of both and could upset the favourites Glenwood on the day.

Maritzburg College is traditionally the dominant school rugby force in KwaZulu-Natal. The first recorded rugby match in the province of Natal took place in the Market Square of Pietermaritzburg in October 1870. The contestants were Maritzburg College (then known as Pietermaritzburg High School) and Hermansburg School. Played on a sun-baked, wheel-rutted, gravel surface, the contest lasted for more than three hours and ended in a victory, for the High School, by two goals to nil.

The arrival of James Mervyn “Skonk” Nicholson, as a master at Maritzburg College, signalled a revival in the school’s rugby fortunes. From 1948 he coached the First XV for 35 consecutive seasons, until 1982. In 1949 the First XV was unbeaten, as were 10 other teams of his, while a further 13 First XVs during that period lost only one match each.

Their latest contribution to the Springbok legacy is prop Ntuthukho Mchunu. Who debuted for the Boks against Wales on 9 July 2022 at the Free State Stadium.

Rugby at Glenwood is the major sporting code. It is a sport that instills values such as integrity, sportsmanship, loyalty, discipline and hard work. Glenwood’s policy of participation in extra mural activities as well as the passion shown by the boys enables almost five hundred youngsters the opportunity of experiencing the ultimate team sport.

Glenwood fields 30 teams on a regular basis. This allows boys from all levels and ability to be part of this wonderful game. The sports department endeavors to provide games for all teams, this has allowed Glenwood to embark on tours out the province to play fixtures against some major rugby playing schools in South Africa such as Affies from Pretoria and Grey College from Bloemfontein.

The School represented South Africa at the Sanix Youth tournament in Japan in 2008 and 2016 and won top honours over both years by winning the finals.

Glenwood can also be very proud of Warren Whiteley who was named the 58 Springbok captain for the 2017 test series against France, the first Glenwood old boy to have this honor bestowed upon him. Their latest contribution is scrumhalf Jaden Hendrikse who made his debut for South Africa off the bench against Argentina in Port Elizabeth on 14 August 2021.

Load reduction implemented on Monday morning – here are your schedules

Woman helps herself to wedding cake BEFORE bride and groom