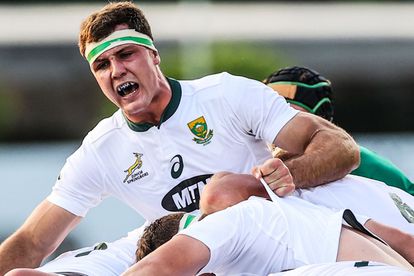 The Junior Springboks side to face France in their U20 Six Nations Summer Series clash in Verona on Tuesday has undergone several changes. Photo: SA Rugby website

The Junior Springboks side to face France in their U20 Six Nations Summer Series clash in Verona on Tuesday has undergone several changes. Photo: SA Rugby website

The Junior Springboks side to face France in their vital U20 Six Nations Summer Series clash in Verona on Tuesday has undergone several changes, which include a couple of positional switches.

The SA U20s won their previous two Pool A matches, against England and Ireland, and a win will see them top their group and set up a playoff match with the Pool B winner.

For Tuesday’s pool decider, props Lamla Nunu and Sebastian Lombard come back into the starting team, as does loose forward Ruan Venter.

Scrumhalf Neil le Roux is handed a start while Nico Steyn, who started in the victories over England and Ireland, is now set to make an impact off the bench.

Donovan Don shifts from right wing to fullback, opening the way for Katlego Letebele – who came off the bench against Ireland – to earn his first start amongst the outside backs.

Junior Springboks have beaten England and Ireland to date

A strong second half saw the Junior Boks overcome England in the opening round, while the SA U20s gave a powerful first half display to put them out of reach against U20 Six Nations and Grand Slam winners, Ireland.

Reinhardt Ludwig has been ever-present as lock in the previous two Junior Bok wins and the second rower, who is also one of the leadership group in the squad, represented the Bulls in the inaugural United Rugby Championship (URC), where the Pretoria franchise were edged in a thrilling final by the Stormers.

Ludwig, who has formed a good partnership with Connor Evans of Western Province so during the Summer Series, knows the contest against France will be a tough one as it will determine the outcome of this difficult group.

“You can’t complain too much if you win two games, but the desire is there to always improve,” explained Ludwig, who added they were a bit rusty against England, and made a good start against Ireland.

“We slipped up a bit in the second half (against the Irish), but that has made us hungry and we’ve put in some good prep work for the French game,” he said.

The Junior Bok vice-captain described France as a quality side and said they will have to play very well if they want to be successful: “They’ve won the U20 Six Nations and U20 World Championship in previous years and we are expecting a tough, physical match. They have a good, skilful side and are coached well, so they will pose a massive threat.”

In Pool B, Wales and Italy both have 10 points from their two bonus-point wins.

They face each other on Wednesday at 20:00 (SA time) with first place in the group at stake.