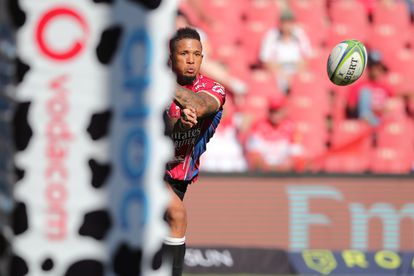 Elton Jantjies of the Lions during the 2020 Super Rugby match between Lions and Stormers at Ellis Park Stadium, Johannesburg on 15 February 2020 ©Samuel Shivambu/BackpagePix

Elton Jantjies of the Lions during the 2020 Super Rugby match between Lions and Stormers at Ellis Park Stadium, Johannesburg on 15 February 2020 ©Samuel Shivambu/BackpagePix

Matchday Four of the inaugural Super Rugby Unlocked season kicks off on Friday, with the inland battle between the Lions and the Griquas at Ellis Park.

The two teams occupy the bottom spots on the table, a position which is unfamiliar for the hosts, who came into the competition as one of the favourites for at least a playoff spot.

With two defeats in as many matches, the Lions will be looking to get off the mark against the only side lower than them in the standings.

The Griquas have, despite some valiant showings, also not managed to register victory, and come off an upset at home to the Pumas.

They had a bye last weekend, and will be looking to come out refreshed against the men from Johannesburg.

News coming in from the Lions camp on the day is that influential flanker Jaco Kriel will not be part of the proceedings at Ellis Park due to “personal reasons”.

The match will kick off at 19:00 (SAST), and will stream live on Supersport Grandstand and is also available on DSTV Now (subscription required).