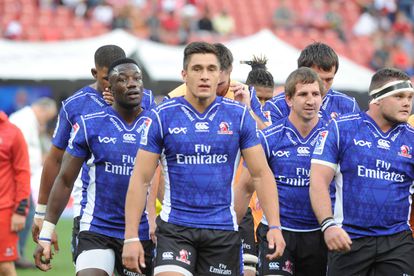 070418 Emirates Airlines Park, Ellis Park, Johannesburg, South Africa. Super Rugby. Lions vs Stormers. Some of the Lions team make their way off the field after a warm up beofr the start of the game.
Picture: Karen Sandison/African News Agency (ANA)

070418 Emirates Airlines Park, Ellis Park, Johannesburg, South Africa. Super Rugby. Lions vs Stormers. Some of the Lions team make their way off the field after a warm up beofr the start of the game.
Picture: Karen Sandison/African News Agency (ANA)

The Super Rugby Unlocked fixture between the Lions and the Cheetahs at Ellis Park has been called off after the hosts recorded a further two COVID-19 cases.

The Johannesburg-based outfit named a depleted squad for the clash, which was originally scheduled to kick off on Saturday afternoon after recording four positive tests.

Lions vs Cheetahs fixture called off

The match organisers have now decided not to go ahead with the match in an effort to limit the risk of further spread of the virus.

According to communication issued out by SA Rugby, all those who have tested positive are in good health and are self-isolating as per Department of Health guidelines.

The match will be rescheduled and, if that is not possible, the Lions and the Cheetahs will be awarded two points each.

“Containing the spread of the disease is a national imperative and this first impact on the rugby schedule is a stark reminder of how vigilant our community has to be and how rigorous we must be in following the rules,” SA Rugby chief executive, Jurie Roux said.

“Safety comes first, and although it is extremely disappointing for all concerned, it is a reminder to our teams and players of the role their actions will play in avoiding the risk of more cancellations.

“Despite having followed the advisory precautions and the plans that were approved by the Department of Sports, Arts and Culture (DSAC), we will take this opportunity to review them and strengthen them if required.”

This means that one Super Rugby Unlocked match remains scheduled for Saturday, making it a total of just two for week three of the competition.

Loftus will host the pick of the weekend’s action as the Sharks visit the Bulls, with the game kicking off at 18:55.

In the week’s other fixture, the Stormers held on for a tight finish against the unfancied fixtures, who claimed the losing bonus point in a 43-37 defeat.