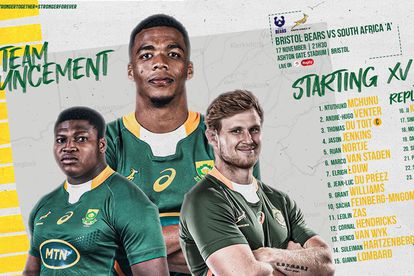 Earlier this week, South Africa ‘A’ head coach Mzwandile Stick made five changes to his starting team to face the Bristol Bears at Ashton Gate Stadium on Thursday, which includes Sacha Feinberg-Mngomezulu and Marco van Staden earning starts in a squad that features 12 capped Springboks.

The clash will kick-off at 21:30 (SA time), and will be available on SuperSport Rugby and SS Grandstand.

Last week, the South Africa A side slumped to a surprise defeat against Munster, while the Springboks have suffered back-to-back losses against Ireland and France.

With that in mind, there will be a desperate hope that SA A outfit can finally pick up the first win on what has otherwise been a forgettable tour for the visiting South Africans.

Notably, Sacha Feinberg-Mngomezulu joined the SA ‘A’ team in Bristol on Sunday after spending the last two weeks with the Boks in Dublin and Toulon respectively, while Van Staden joined the SA ‘A’ team after being ruled out of Springbok coach Jacques Nienaber’s original 35-man Outgoing Tour travelling squad due to a rib injury.

Feinberg-Mngomezulu replaces Johan Goosen at flyhalf in a new halfback pairing with Grant Williams, while the only other change among the backs is at fullback, where Gianni Lombard takes over from Aphelele Fassi, who injured an ankle injury in the team’s 28-14 defeat against Munster last Thursday.

The changes in the forward pack were at hooker, where Andre-Hugo Venter is named in place of Joseph Dweba, who is on standby for the Springbok squad, with Van Staden replacing Phepsi Buthelezi at flank.

TEAMS FOR THE SOUTH AFRICA A V BRISTOL GAME