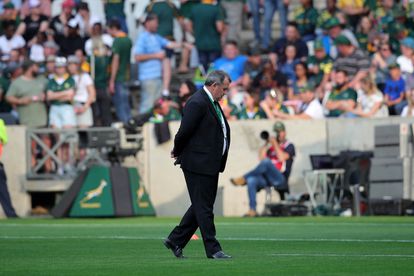 Before New Zealand travelled to South Africa, it emerged that All Blacks coach Ian Foster had reportedly been told to step down if the team doesn’t make improvements during the two Tests in SA.

New Zealand were coming off the back of a humbling series defeat against Ireland, while they then suffered a historic loss to the Springboks in the opening Rugby Championship match, which ramped up pressure on Foster and the team.

There have been serious question marks hanging over the balance and quality of the current All Blacks squad, and Foster has increasingly come under fire since taking over the top job, while two of his assistant coaches – John Plumtree and Brad Mooar – were recently sacked.

According to a report in the New Zealand Herald, NZR chief executive Mark Robinson held a tense meeting with Foster, telling the coach that if performances and results didn’t improve in South Africa, he would be expected to resign.

Yet, with the All Blacks clinching a famous win over the Boks at Ellis Park this past weekend, it’s thought that his job may have been saved, with Robinson also saying on Sunday that no final decision had been taken as yet.

“I haven’t heard or read those comments, but he’s got a job to do,” Foster told reporters in Johannesburg when asked about Robinson’s remarks. “I’m about to hop on a plane and go home.

“I’ll be given feedback, no doubt, but my expectations are that I’m the All Blacks head coach and later in the week I’ll be going to Christchurch and assembling the team until I’m told different.

“I certainly feel that I have the support and backing of the All Blacks,” he added. “There’s still processes New Zealand Rugby want to go through. To coach this team, you have to have categoric support.”

Part of New Zealand Rugby’s desire for Foster to resign was reportedly as a result of a reluctance to incur any more costs from contract terminations, but it’s believed that the 57-year-old has insisted the governing body must fire him if they want him to step away.

With Foster facing increasing criticism and online abuse, former All Blacks winger Julian Savea recently now stepped up to say that some of the comments have gone too far.

“Shocked and disturbed at some of the comments and remarks I’ve seen and heard about Ian Foster on social media lately,” Savea wrote on his Twitter account.

“In a country where mental health is a big issue, where 72% of suicides are men and a high number of depression amongst men, you would think people would be a bit kinder and think about their words before they make remarks on someone’s integrity, appearance and character, especially when they don’t know them on a personal level.

“I’m ashamed that this is how a human is treated and dragged in the media here in NZ.”

Other All Blacks TJ Perenara and Ngani Laumape also endorsed what Savea had said. while former Springboks assistant coach Gary Gold also commented that he agreed 100%.

Savea’s call for the public to back off when it comes to Foster echoes that of former Scotland coach Matt Williams who said the public and media response was embarrassing after the series against Ireland.

“Ian Foster has suffered far more public criticism and humiliation than any coach should be forced to endure for a sporting defeat,” he wrote in a column for the Irish Times.

“Not for the first time, the reaction to defeat by the New Zealand media and their wider rugby community has exposed a deep flaw of character. The treatment of Foster by his own community has been nothing short of shameful. As a coach, criticism comes with the badge but the personal vilification he has had to endure is simply not acceptable.”