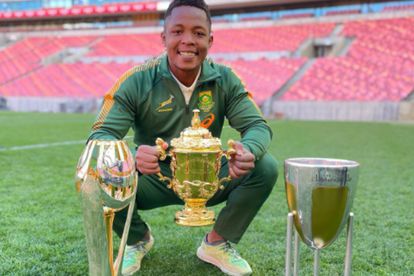 In a worrying turn of events that came to light this past weekend, it was revealed that Bulls and Springboks wing Sbu Nkosi has been missing for over three weeks now.

Nkosi was last seen and heard from on 11 November, but he has not been heard from since then. The Blue Bulls Company have confirmed they reported a missing persons case to police after multiple attempts to reach Nkosi were unsuccessful.

Since the news became public on Saturday, there have been widespread concerns for Nkosi as the search has intensified.

On Twitter, well-known South African rugby influencer – known as Oom Rugby – took to social media to say that he had heard that Nkosi has “made contact”.

This could be the news that everyone has been waiting for, with fears for Nkosi’s wellbeing having intensified in recent times.

Another report suggests he has been located some 300km from Pretoria.

The 26-year-old’s family has not spoken publicly, but some comments on social media suggest his mother has worryingly not been able to get hold of him as well during this time.

Anyone with further information about the whereabouts, or information that may assist the police, can contact the Sunnyside Police Station on +27 12 422 3600 or contact Crime Stop on +27 8600 10111. You can also email info@bluebull.co.za.

THIS IS WHAT WE KNOW ABOUT THE MISSING CASE OF SBU NKOSI: