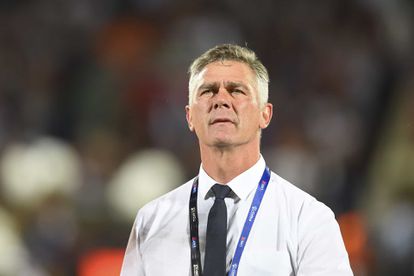 Former Springbok coach Heyneke Meyer is set for a spell in the United States of America, after being announced as the Director of Rugby for Major League Rugby side Houston SaberCats.

Meyer’s tenure as Springbok coach stretches from 2012-2015 where he led the side to a third place finish at the 2015 Rugby World Cup in England.

Perhaps, his reign will be remembered most for the Springboks shock first ever defeat to Japan at Brighton during the tournament group stages.After leaving his post as Springbok coach, Meyer headed to France where he took up a role as Director of Rugby at French Top 14 side Stade Francais.

READ | (WATCH ) THE TRAILER FOR ‘FED TO THE LIONS’ , THE STORY OF FORMER SPRINGBOK COACH PIETER DE VILLIERS

After six years at the French Club, Meyer has decided that it is time for a new and fresh challenge and he has since crossed the Atlantic in order to meet it head on. He will take up the responsibility of steering the SaberCats rugby club into the right direction.

“This is a very important time for the SaberCats organisation. I am fully committed to turning this team into one that wins on a regular basis and brings a championship to all the dedicated fans of Houston,” Meyer said in a statement on the franchise’s official website.

“The SaberCats have the best facilities in the country, and I am excited to get to work.” Continued Meyer.

Having won Super Rugby and Currie Cup titles with the Bulls in South African rugby, SaberCats owners made it no secret that his successful history was a huge attraction pull behind the appointment.

“Heyneke has a pattern of winning, and that’s what we want with the SaberCats,” said JT Onyett, SaberCats president.

“The interest in this job was very strong, but Heyneke stood out from the beginning. Not only does he bring instant credibility with his background, he presented a clear path for the future.” Continued Onyett

What will his job entail?

Meyer will be a busy man in his new post, as he will be responsible for overseeing more than just what happens with regards to SaberCats senior side. Meyer will also be responsible for the teams Rugby HTX Developmental squad as well as their under-18’s and academy outreach activities.

Meyer will now work hand in hand with the SaberCats management in hope of forming a coaching staff that will in turn form a successful playing squad that will breed a winning history at the club.

Once accused for signing too many South Africans in France, Meyer doesn’t seem like he will face the same issue this time around if his objectives are anything to go by.

“Our goals are simple – win the MLR while also developing American talent through our HTX and academy sides,” Meyer added.

“With resources like AVEVA Stadium, there is no reason we can’t accomplish both goals.” He concluded.