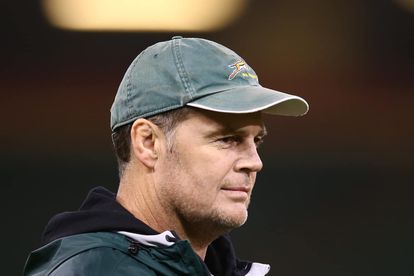 South African rugby‘s Director of Rugby Rassie Erasmus believes the Springboks will be well prepared for their match against Argentina in Salta thanks primarily to their decision to remain in New Zealand, rather than return home to train for the clash.

Salta is a provincial capital in mountainous northwestern Argentina and the match between the Springboks and the Pumas will be played in high altitude conditions as a result.

There would have been a strong argument to return to South Africa to train in Gauteng and emulate the conditions they will face against Argentina.

However, Erasmus felt it would be more benificial for the squad to cut down the amount of travelling and use the extra days in New Zealand for team-building exercises.

“We chose to stay behind in Auckland (after the Wellington Test) mainly for two reasons,” Erasmus said.

“Firstly, it was to cut down on the amount of travelling time between New Zealand, South Africa and Argentina.

“And secondly, we had some good team-building exercises, while we used the time together to fit in some extra training time with the squad.

“We have grown into a very tight unit, so looking back at the past week I think we ticked both those boxes.”

Around half of the squad will travel to Argentina on Friday night, where they will continue to train in Buenos Aires until the rest of the travelling party joins them on Sunday to complete preparations for the Rugby Championship decider against the Pumas on 10 August.

The entire squad will train in the Argentine capital until they fly out to Salta on Thursday 8 August ahead of the clash.

The match will be a crucial encounter for the Springboks, who could claim victory in the shortened Rugby Championship with a win over Argentina.

The Southern Hemisphere international competition has been cut short in 2019 due to the Rugby World Cup set to take place in Japan in September.

The Springboks are currently undefeated after grabbing a bonus-point 25-17 win over Australia at Ellis Park to start the tournament, followed by the dramatic 16-all draw against New Zealand in Aukland.

If Australia beat New Zealand in the early match of the day on 10 August, it probably won’t even matter what happens in South Africa’s clash, but they will likely be determined to win it regardless to continue building momentum into the World Cup.

Watch: Bulls get down and dirty to snap losing streak

Lions counting the cost of loss to Munster