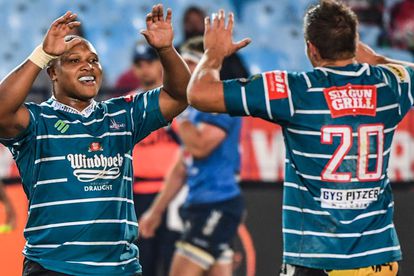 A new Currie Cup champion will be crowned next week after a stirring second half display – which delivered two tries and a penalty try – paved the way for a well-deserved 30-19 victory for Griquas over the Bulls in their semi-final at Loftus on Friday evening.

PREVIEW: BULLS ROPE IN VERMEULEN AS SECRET WEAPON BEFORE FINAL

The two sides went into the halftime break separated by just four points with the score 7-3 in favour of the defending champions after their captain, Lizo Gqoboka (prop), scored the only try of a tightly contested first half when he forced his way over following a successful Bulls lineout, with Juan Mostert adding the extras.

In turn, the experienced George Whitehead, who came on as an injury replacement midway through the first half, slotted a penalty goal for Griquas’ only points of the opening stanza.

Right from the restart, the visitors from Kimberley shifted to a higher gear which netted three tries and two penalty goals, which were enough to hand them their first final appearance in more than five decades.

Whitehead, who has captained Windhoek Draught Griquas often in the past, led from the front and made a personal contribution of 18 points through one try, two conversions and three penalty goals.

The first half was a real arm wrestle, but after the break it was the visitors who had the early advantage and they forced the hosts to concede two kickable penalties which Whitehead had no problem sending through the uprights to nudge his team into a 9-7 lead with almost a half hour of play still remaining.

In fact, they never relinquished their lead as they slowly turned the screws on the home side to tilt the momentum in their favour. Not even a seven minute delay, when the floodlights failed, could stop the Northern Cape side.

The real momentum swing came via a try initiated by a skip-pass in midfield by outside centre Rynhardt Jonker, who found flanker Hanru Sirgel out wide to score a brilliant set-piece five pointer, while the Vodacom Bulls were playing with just 14 men after Jacques van Rooyen was sin-binned for a dangerous clean-out.

Whitehead landed the difficult conversion to stretch their lead to 16-9 and then went over the tryline for his team’s second try to push them into a comfortable 23-7 lead, with 15 minutes remaining.

The Bulls hit back through a Bernard van der Linde try under the posts, but the visitors from Kimberley soon added the maximum points to their tally when the referee awarded a penalty try five minutes before fulltime, to all but seal the victory.

Mostert scored on full-time and missed the drop-kick conversion, however, the hooter sounded second afterwards which resulted in big celebratory scenes from Windhoek Draught Griquas and their supporters.

The Cheetahs and Pumas are in action tomorrow afternoon in the second semi-final at the Toyota Stadium in Bloemfontein (kick-off 13h30), with the winner playing the Griquas in next weekend’s final.

And in the first Currie Cup First Division semi-final, between the Griffons and Georgian side Black Lion played earlier on Friday, the Northern Free Staters clinched a thrilling 41-38 victory after extra-time in front of their faithful in Welkom. They will face the winner of Saturday’s other semi-final, between Eastern Province and the SWD Eagles in Nelson Mandela Bay.

The South African Word of the Day: Shibobo