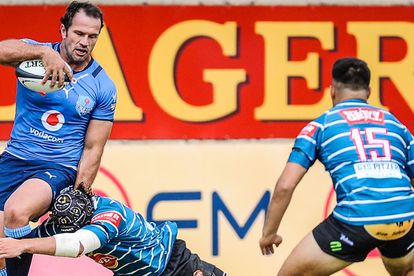 There wasn’t much movement at the top of the Currie Cup standings, but the Cheetahs, Sharks and Bulls enjoyed good victories this weekend. Photo: SA Rugby website

There wasn’t much movement at the top of the Currie Cup standings, but the Cheetahs, Sharks and Bulls enjoyed good victories this weekend. Photo: SA Rugby website

There wasn’t much movement at the top of the Currie Cup standings, but the Cheetahs, Sharks and Bulls started putting some daylight between them and the chasing bunch with good victories this weekend.

The Free Staters overtook the KwaZulu-Natalians at the top of the log with a massive win in Bloemfontein; the Bulls avoided a tricky encounter with a strong performance in Kimberley; and the Durbanites also won away from home in Nelspruit, although they failed to score a try.

The Cheetahs’ 66-14 triumph over the Lions in a weather-interrupted match on Saturday evening for their fourth win in a row, and unfortunately for the visitors, this match will be remembered for all the wrong reasons – the 66 points they shipped are the most the men from Johannesburg have ever conceded in the Currie Cup.

Furthermore, the points’ difference of 52 is just two less than they 54 from their 59-5 defeat in 2006, which was also against the Free Staters.

After a slow start, the Bulls found the right gear and ran Griquas ragged for a 53-27 win in Kimberley, and on Friday evening Boeta Chamberlain slotted eight penalty goals as the Sharks comfortably beat the Pumas by 24-10 to keep their unbeaten start intact.

The Western Province had a bye this weekend.

As a result of the weekend’s action, the Cheetahs now head the standings courtesy of a superior points’ difference. The Free Staters and the Sharks both have 18 points, with the Bulls placed third on 15.

The Cheetahs surged into top spot on the Currie Cup log after a big 66-14 triumph over the Lions in Bloemfontein on Saturday evening.

Five tries to a single reply gave the Cheetahs a commanding 38-7 advantage over the Lions after a lively, weather-interrupted first half. Play was temporarily stopped halfway through the opening stanza because of a nearby lightning storm, with the home team leading by 17-0.

Fortunately, the teams returned to resume play two minutes before the allotted time for such an interruption was about to expire. The Free Staters added a couple more tries to their tally in a dominant second half, while their opponents replied with a single score for their 66-14 win.

The Bulls fired a double-barrelled shot when they ran in seven tries to thump Griquas 53-27 in their Currie Cup clash in Kimberley on Saturday afternoon.

Gert Smal’s Bulls came out all guns blazing in Kimberley and maintained their up-tempo assault throughout, pulling away in the second half to emphatically bounce back from their defeat to the Cheetahs and hand the Peacock Blues their first loss at home this year.

The two-time defending champions had too much class and strings in their bow for the game and outgunned Griquas. Three tries, two in quick succession, put the men from Pretoria in the driver’s seat and saw them head into half-time with a 22-15 lead.

Try as they might, and they twice landed counterstrikes to stay in the fight, Griquas eventually fell off the pace as the visitors raced to victory with an overwhelming second-half showing. For their never-say-die attitude, Pieter Bergh’s men were rewarded with a bonus point thanks to a late try by replacement Michael Amiras.

Boeta Chamberlain slotted eight penalty goals as the Sharks comfortably beat the Pumas by 24-10 in their Currie Cup match played at the Mbombela Stadium in Nelspruit on Friday evening.

Their win over the Pumas means the men from Durban made it four from four. Chamberlain, who was named Champion of the Match, kicked four penalty goals in each half to seal the win.

The winning side led 12-10 at the halfway stage, with Chamberlain landing four crisp penalty goals, although the moment of the half – and probably the match – belonged to the Pumas for a brilliant long-range try, when they ran the ball from inside their own 22.

The ball changed hands several times by way of some deft offloads before speedy blindside flanker Anele Lungisa was on hand to take the final pass and dive over in the corner for a magnificent team try.

However, Chamberlain continued with his kicking spree in the second half to punish the home side for their numerous mistakes, while the visitors’ defence held firm.

Over 100 teenagers from age 13 delivered babies