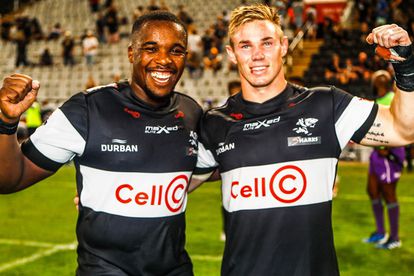 The Sharks returned to winning ways with a hard-fought victory over Griquas in their Currie Cup encounter in Kimberley. Photo: SA Rugby website

The Sharks returned to winning ways with a hard-fought victory over Griquas in their Currie Cup encounter in Kimberley. Photo: SA Rugby website

The Sharks returned to winning ways with a hard-fought 13-6 win over hosts Griquas in their Currie Cup encounter in Kimberley on Wednesday evening.

The Durbanites led 10-6 at the break.

After suffering two back-to-back losses in their previous outings, the KwaZulu-Natalians bounced back to beat a determined home side in a tough tussle played in excellent early evening conditions in the Northern Cape.

The Sharks went into the half-time break with a four point advantage following a converted try and a penalty goal, while the home side replied with two successful penalty kicks.

Sharks hooker Fez Mbatha grabbed the only try of the match when he dotted down after a lineout mall, while Joaquin Diaz Bonilla added the extras. The Sharks pivot also hit the target later on with an easy penalty goal attempt.

The Argentinean Test player scored the only points of the second half when he succeeded with a late penalty goal from under the posts take the final score to 13-6 for the visiting team.

Flyhalf George Whitehead kept the hosts within striking distance with his two first-half penalty goals, however, the Peacock Blues would be disappointed with the several spilled opportunities especially in the opening half.

They launched several attacks on the visiting try-line, but each time they came away empty handed. It was as a result of committing crucial errors when more patience were needed and also solid defence by the black and white jerseys.

The second half was a real arm wrestle, with neither side able to gain the outright advantage. However, Bonilla had the final say when he easily kicked over his 76th minute goal attempt to seal a tightly contested match.