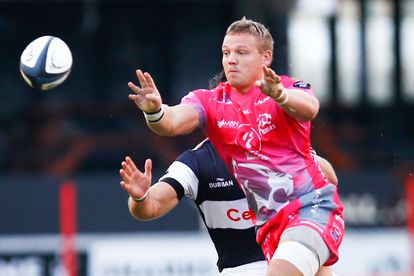 The Pumas defeated hosts the Sharks on Friday evening in Durban to maintain their push for a Currie Cup playoff spot. Photo: Steve Haag/Gallo Images

The Pumas defeated hosts the Sharks on Friday evening in Durban to maintain their push for a Currie Cup playoff spot. Photo: Steve Haag/Gallo Images

The Pumas defeated hosts the Sharks 20-10 on Friday evening in Durban to maintain their push for a Currie Cup playoff spot.

It was the Mpumalanga-based team that made the most of their first-half opportunities to lead 17-3 courtesy of two converted tries and a penalty, while the home team replied with a sole drop goal.

The coastal side played better in the second half, scoring a converted try while the visiting team added a penalty to register a massive morale boosting win.

Pumas a point behind Sharks in Currie Cup log

They remain fifth on the league table, but moved to within one point of the fourth placed Griquas, who have 20 points.

The Sharks made a lot of lineout mistakes, especially in the first stanza, which robbed them of a decent attacking platform and at the same time handing the momentum to the pink and grey jerseys.

The Lowvelders had most possession and territory in the opening spell, however, they spilled many promising opportunities by either committing handling errors or taking wrong options.

Jimmy Stonehouse’s team scored ten points in as many minutes inside the first half through an Eddie Fouche (inside centre) penalty goal while fullback Devon Williams grabbed the first of his two tries – scored out wide after the visitors had managed to steal a home lineout.

Perhaps frustrated at his team’s inability to breach the opposing defence, flyhalf Boeta Chamberlain steered a drop goal high through the upright to put the home outfit on the scoreboard (10-3) with just over 10 minutes remaining before the half-time whistle.

However, the Pumas were rewarded for their more attacking intent when Williams was again on hand to take the final pass and dot down for his second converted try as they increased their half-time lead to 17-3.

The black and white jerseys played much better in the second half with replacement hooker Fez Mbatha, on for Kerron van Vuuren, diving over following a strong a driving maul to narrow the gap to 17-10.

Fouche then landed his second penalty goal of the evening to restore their ten-point lead with the game poised at 20-10 in favour of the Lowvelders.

Then followed period of sustained pressure from the visitors, however, the home side’s defence stood solid as they thwart at least three dangerous try-scoring attempts from the desperate home side.

Daily devotion: Your bible verse and prayer for 21 January 2023